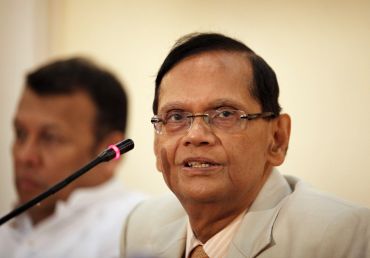 Sri Lanka will reject the final draft of a United States-sponsored resolution submitted at the United Nations Human Rights Council which seeks to "discredit" and "single out" the country over alleged human rights violations, External Affairs Minister G L Peiris has said.

Peiris, in his communique to member states setting out the government of Sri Lanka's stand on the resolution, said, "Drawing disproportionate attention to Sri Lanka's situation and introducing resolution that seeks to discredit, single out and humiliate the country are unhelpful and counterproductive to Sri Lanka's current reconciliation process".

"Just as the government of Sri Lanka did not recognise the last HRC resolution, it rejects the new resolution. Sri Lanka intends to request a vote when the draft resolution is taken up at the Human Rights Council on 21 March 2013."

"Sri Lanka seeks the understanding and the support of HRC member states at the vote on this resolution."

Peiris said that the beneficiaries of the resolution would be none other than the divisive forces that seek to destabilise the hard won peace in Sri Lanka, he said.

The Sri Lankan external affairs ministers warned that "the precedent created by intrusive, biased and politicised actions such as the US sponsored resolution on Sri Lanka would pose a danger for all nations".

The US resolution is being co-sponsored by some of the EU member states such as Austria, Belgium, Denmark, France, Germany, Greece, Italy, Norway, Britain and Canada.

Meanwhile, the Sri Lankan officials in Colombo said the resolution was expected to be much watered down so as to win the support of India.

Source: PTI© Copyright 2020 PTI. All rights reserved. Republication or redistribution of PTI content, including by framing or similar means, is expressly prohibited without the prior written consent.
Related News: Sri Lanka, L Peiris, HRC, US, Universal Periodic Review
SHARE THIS STORY
Print this article
Why Jayalalitha is happiest at the DMK pullout from UPA
India may bring strong amendment on Lanka at UNHRC
India maintains suspense on UN resolution on Lanka

What US draft resolution seeks from Lanka government 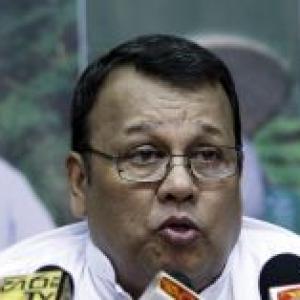