K'taka crisis: Yeddyurappa may have to wait longer

Former Karnataka Chief Minister B S Yeddyurappa, who is camping in New Delhi, may have to wait a while longer before re-claiming the chief ministerial chair from D V Sadananda Gowda, as the Bharatiya Janata Party is not in the mood to "reward" his indiscipline.

Till the evening of March 22, party president Nitin Gadkari had not bothered to schedule a meeting of the BJP Parliamentary Board or the core committee where any decision on the party's Karnataka leadership would have to be taken.

Several members of the board and the core committee have been saying privately the party cannot be seen to be giving in to Yeddyurappa's blackmail tactics. If he is allowed to succeed it will be the end of authority of the central leadership.

At the same time these leaders are not ruling out a change, but feel it cannot happen immediately after the former chief minister's open rebellion. There will have to be cooling-off period and Yeddyurappa may have to show he is a good boy willing to fall in line before he is given back the prize position.

Of course, the BJP can be expected to go the extra mile to ensure its first state government south of the Vindhyas does not fall before completing its five-year tenure.

Yeddyurappa's clout stems from his firm base in the sizeable 'lingayat' caste, but removing Gowda may annoy the powerful Gowdas. There is also a view that Yeddyurappa cannot be pampered to the extent that the rest of the party in the state is reduced to a cipher.

A very senior leader added that the BJP's defeat in the Chikmagalur Lok Sabha by-election was not entirely because Yeddyurappa had kept away from the campaign. There are others who also question his claim of support of some 70-odd state legislators.

The party leadership may decide to ask Yeddyurappa to go back, attend the assembly session, support the party's candidates in the elections to the upper house and generally behave himself before being considered for the top job in the state. 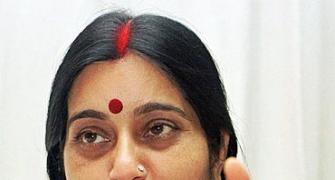