The Congress in Karnataka on Wednesday found itself in a tight spot after a video showed a purported conversation between the party media coordinator M A Saleem and former Lok Sabha member V S Ugrappa attributing the Congress state president D K Shivakumar's involvement in a scam when he was a minister. 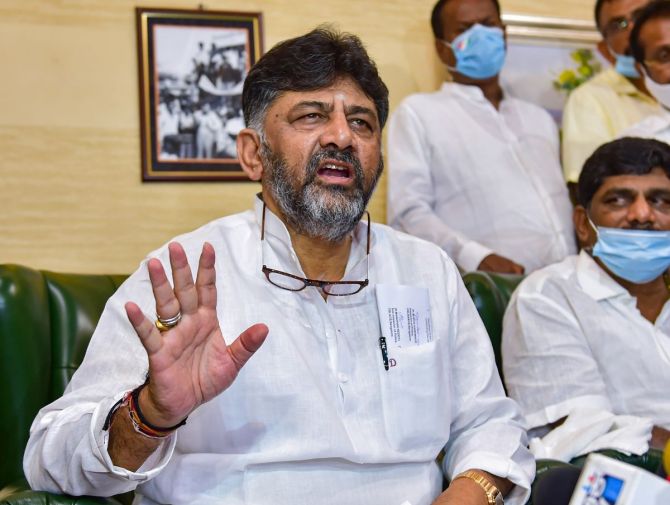 Taking strong exception to the clipping that went viral, Shivakumar said he cannot deny that the conversation did not take place but rejected the content of the conversation.

Acting swiftly, the party expelled Saleem from the party for six years and served a show-cause notice to Ugrappa, who is Congress spokesperson, seeking an explanation in three days.

The conversation is said to be related to the scams in the irrigation department in which Shivakumar was allegedly involved when he was irrigation minister in the coalition government of Congress-Janata Dal-S, which ran for 14 months and collapsed in June 2019.

However, Ugrappa clarified that Saleem was only briefing him on what the Bharatiya Janata Party people have been talking about the raids carried out by the income tax department since October 7 against three major contractors executing irrigation and highway project on 47 premises in four states, including Karnataka and Maharashtra.

The search and seizure by the I-T officials have resulted in detection of undisclosed income of about Rs 750 crore, the I-T department said in a statement on Tuesday.

Minutes before the press conference by Ugrappa on Tuesday, Saleem sat next to him and started whispering about the scams.

"Earlier, it was eight per cent. He increased it to 12 per cent. These are all adjustments by DKS," Saleem is heard saying in the purported video.

"Uppar and G Shankar, the one from Hospet in Ballari, whom you know. Uppar is from Bengaluru," Saleem was seen explaining.

When Ugrappa corrected that Uppar is from Vijayapura, Saleem said Uppar's house is right opposite to former chief minister S M Krishna's in Bengaluru.

"It's (irrigation) a big scandal. If dug properly, his (D K Shivakumar) role will also come out. You don't know, sir, the three made Rs 50-100 crore. If they had made so much (of wealth), then guess how much he (Shivakumar) would have made. He is a collection giraaki (extortionist)," Saleem is heard saying.

In reply, Ugrappa said he did not know those things.

"I don't know this. We all made a point to make him (Shivakumar) state president. That's why I am not saying anything. These are the reasons...," Ugrappa is heard saying.

"He stammers these days, maybe because of low BP or something else," Saleem said to which Ugrappa agreed.

Saleem also wondered whether Shivakumar drinks and even gets emotional these days.

He then hailed Siddaramaiah for his strong body language.

Reacting to it, he said the media has shown Saleem and Ugrappa speaking against the party state chief.

He said he has no connection with the content of the conversation.

Clarifying his position, Ugrappa held a press conference today and said Shivakumar and former Chief Minister Siddaramaiah are like two eyes and both were dear to him.

Ugrappa said Saleem was briefing him about what the BJP leaders were talking outside. However, the place chosen by him was wrong and he could have spoken in private and not before the media, he clarified.

The developments come well ahead of the crucial bypolls to Sindagi and Hanagal assembly segments on October 30.

Also, it has come at a time when the party has geared up for the Assembly elections, which is one-and-a-half years away.

The party had also seen in the past the show of strength between the factions of Shivakumar and Siddaramaiah. Ugrappa and Saleem are considered as Siddaramaiah's close aides. 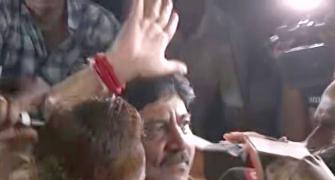 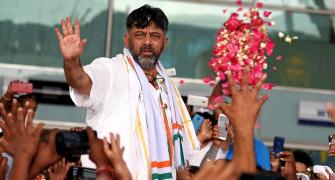 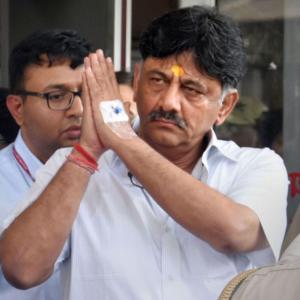 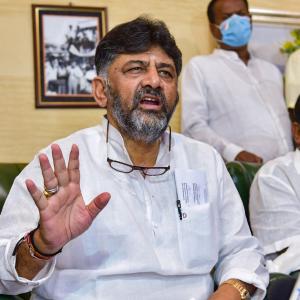