News
Business
Movies
Sports
Cricket
Get Ahead
Money Tips
Shopping
Sign in  |  Create a Rediffmail account
Rediff.com  » News » 'Khurshid is an upright minister, he is NOT running away'

'Khurshid is an upright minister, he is NOT running away'

Information and Broadcasting Minister Ambika Soni on Saturday said Law Minister Salman Khurshid will respond to the allegations against him on returning from his foreign visit and questioned whether it was fair to demand resignations by creating pressure through dharnas.

"Salman Khurshid, the law minister, has been representing the government outside. He is not in India. He is expected back either late on Saturday or Sunday. I am told he himself has scheduled a press conference where he will answer all questions and answer to the extent you want him to answer," Soni told reporters.

Soni said Khurshid had a reputation of being a "very upright" law minister and a "honourable" political leader, whose side of the story needed to be heard.

"The charges cited against him in television channels and his trust indeed would have a shattering effect on anybody because you haven't even heard his side of the picture," Soni said.

"Let him be back tomorrow, he will speak to you all. He is not running away, he will give you the real picture and then it is better to take the story further if you feel it needs to be taken further," she said.

"It's easy for people to level charges, but there has to be much more to it than sitting down on a strike and saying either he resigns or we will continue to sit. I think that's not the way governments function in a democracy. There is a rule of law," she said.

"You don't ask for a resignation just suo moto like that. How can a government work," she said.

She said governments could not work under pressure and the United Progressive Alliance government certainly did not do so.

"Today, somebody will sit (on a dharna), tomorrow I will sit, then somebody else. If you only keep asking for resignations, then how will the government work," she said.

"You have a system of law, if you have some basic proof that something wrong has happened or corruption is there. I am myself in favour of eradicating corruption, but there is a way to do it. It cannot be done through blackmail, threats or pressure," she added.

Asked by a reporter if she thought her party had been silent on the crimes against women in Congress-ruled Haryana, she said party president Sonia Gandhi had herself visited the state.

"Congress president herself has spent a whole day visiting people and she wanted to go even earlier. And she is pursuing this work. She has deputed people to take whatever she promised there to fulfill her promises," Soni said.

She said her party leaders had disowned the "insensitive" statements made by some leaders. Vulnerable sections and women have to be defended, Soni said.

Asked whether the government would hold talks with India Against Corruption leaders, Soni said she was not empowered to speak on that. She added that the atmosphere did not seem conducive for talks. 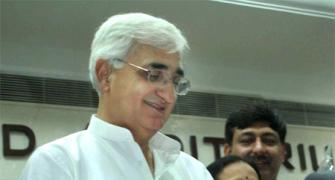 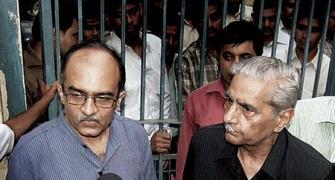 What about deals struck by the Bhushans, asks Cong
UPA will not last beyond winter session: BJP 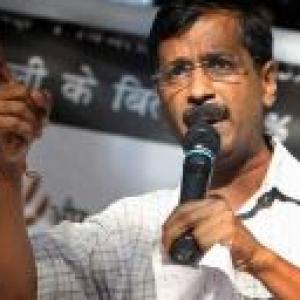 Allegations baseless, Khurshid will NOT resign, says his wife