Eight days after top Islamic cleric Maulana Showkat Ahmad Shah was murdered, Jammu and Kashmir police on Saturday claimed that it had cracked the case and arrested three persons.

Kashmir Inspector General of Police S M Sahai told media persons in Srinagar that members of a radical religio-political outfit named 'Sout-ul-Haq' and some other radical elements were behind the conspiracy to eliminate the Maulana.

"Maulana Showkat was perceived to be against sectarianism and was helping defuse sectarian clashes. His work in the education field, especially trying to get a University from the government, was perceived by them as a compromise with the government. When they failed to dislodge him through elections, a conspiracy was hatched to eliminate him. Also his proximity with certain separatist leaders was not liked by them," Sahai added.

was hatched in the Srinagar central jail. Two persons -- Abdul Gani Dar alias Abdullah Gazali and Ashiq Hussain Faktoo, who is currently lodged in the jail -- discussed the broad contours of the plan."

"The actual execution of the plan was left to one Javaid Ahmad Munshi alias Billa Papa, a resident of Chanapora, Srinagar, who sought help from Lashkar-e-Tayiba commander Abdullah Uni. He received some material from Uni and arranged some of it locally. Various parts of the execution were done by other members. However, the actual triggering of the IED was entrusted to one Nissar Ahmad Khan alias Ishaq," the top cop said.

He said Abdullah Gazali, Javaid and Nissar Ahmad Khan have already been arrested. 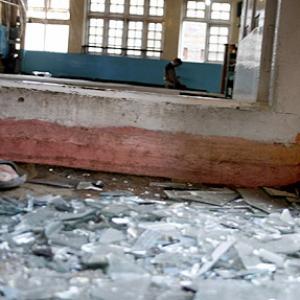