Keshubhai to meet BJP top brass in Delhi on Jun 19

The decision to visit Delhi came after a meeting of an anti-Modi group of the BJP at  Keshubhai's residence in Gandhinagar on Monday evening. Keshubhai and other BJP leaders, including those, who left the party, have started a campaign against Modi in the elections year.

"Keshubhai is going to Delhi to inform the central leadership about the situation prevailing in the party here," former chief minister Suresh Mehta, who was also present at the meeting that was held at Patel' residence, said.

"This meeting is a very crucial phase of our decision-making process. Our future course of action will depend upon the outcome of the meeting that we will have with party's central leadership," Mehta further said.

Though the anti-Modi camp is not hopeful of getting any major reprieve from BJP's central leadership, they want to go step by step, sources said.

"We cannot jump the gun and take the decision. That is the reason we are going to meet the leadership to first apprise them of the real situation in the state," Mehta further said.

Keshubhai, who was unceremoniously removed from the chief minister's post in 2001 and was replaced by Modi, has decided this time to fight against Modi, by banking on the numerically-strong Patel community.

In the last few months, Keshubhai has openly criticised Modi at various public meetings. He had alleged that the people of Gujarat, especially the members of his Patel community, were living in fear under Modi rule.

Those present at the meeting included Gordhan Zadafia, former minister of state for home in the Modi government, who left BJP in 2007 to form his own party the 'Maha-Gujarat Janta Party'. Leaders like Nalin Bhatt and Kanshiram Rana were also present.

Zadafia, who will go to Delhi on Tuesday, will hold a press conference at the Press Club of India "to highlight facts about the state", sources close to him said. 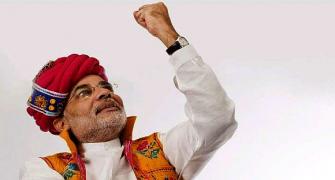 The Congress ship is sinking: Narendra Modi
CBI to quiz IB officials on alert about LeT attack in 2004

Analysis: Why Kalam bowed out of the presidential race

U'khand BJP MLA says he is not joining Congress