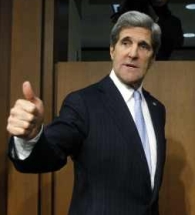 The fourth Strategic Dialogue between India and United States next week would set the tone of engagement between the two countries during the second term of President Barack Obama, eminent American experts have said.

"It will be the first meeting between Secretary of State John Kerry and External Affairs Minister Salman Khurshid and therefore likely to set the tone of engagement between the two countries during President Obama's second term," they say.

"It (Strategic Dialogue) will define the agenda for US-Indian relations for the duration of US President Barack Obama's second term. It will also be the first time that Kerry meets his counterpart, Indian Minister for External Affairs Salman Khurshid, in a formal setting," said Ashley Tellis, from the Carnegie Endowment.

A known South-Asia expert in Washington, Tellis said the centerpiece of the talks will be the conversations Kerry has with Khurshid and Prime Minister Manmohan Singh on the direction of the US-Indian relationship and what must be done to deepen it further.

Tellis said the dialogue should have three aims.

"The first and most important objective for Kerry, in my view, must be building personal relationships. Developing a rapport with his Indian counterpart will do more for the bilateral relationship than any specific ‘deliverables’ at this juncture because the myriad activities under way are already yielding their own fruits outside of the public eye," he said.

"The second objective should be having a freewheeling but comprehensive conversation about the state of the world, particularly the situation in Asia and important sub-regions such as East Asia, the Middle East, and the larger South Asian area," he said.

"The third objective should be encouraging India to accelerate the economic reforms that it began two decades ago but has yet to complete. If implemented, these reforms would offer the best opportunities for deepening the bilateral relationship. For that reason, they merit serious conversation," Tellis said.

"India will not be our formal ally, but it is not unrealistic to think of an easy and frank exchange of the kind we enjoy with our treaty allies like the United Kingdom and Japan; we don't always agree with them but we trust and value their views. The goal is a true Indo-American partnership; our two countries deserve no less," they wrote.

Inderfurth and Camp recommended that the two countries need a long-term framework on economic issues that would include a bilateral investment treaty and a free trade agreement as an achievable goal.

"We should bring India into APEC (Asia-Pacific Economic Cooperation) and the Trans-Pacific Partnership discussions. For its part, India needs to vigorously pursue and implement economic reforms and trade liberalisation," it said.

On defence, while the US needs to be consistent and reliable in technology transfer decisions; India needs to overcome its negative perceptions about US reliability," they said.

"In addition, we should commence negotiations to renew the 2005 defence cooperation framework agreement with a comprehensive security compact by 2015," Inderfurth and Camp said.

Noting that the US must continue to pursue the potential of the path-breaking nuclear agreement; Inderfurth and Camp said India needs to recognise the degree of US disappointment that the liability provisions remain incomplete.

"Beyond nuclear, India's power needs are extraordinary; we can help in many ways, especially now that the way has been cleared for liquefied natural gas exports. Collaboration on clean energy and renewables should continue to forge ahead," they wrote.

Observing that in his first term, Obama took a bold step in endorsing India's eventual permanent membership in an expanded UN Security Council, Inderfurth and Camp said in his second term, they need a stronger dialogue on global issues with India-in New York, New Delhi, and Washington-that should include a pragmatic discussion of Security Council reform and expansion.

"Our China dialogue needs to be continued and expanded, with the common purpose of encouraging China's peaceful rise. An India-China-US trilateral dialogue is worth pursuing as well," the former American diplomat said.

Pix: Clinton out, Kerry takes over as secretary of state