Wooing voters with promises to provide 36 lakh employments, rice for Rs 1 a kg for the Below Poverty Line families and Agriculture loans at 3 per cent interest, the Congress-led United Democratic Front on Friday released its manifesto for the Apr 13 elections to the state assembly after ironing out differences with two of its partners over seat allocations.

CMP would be contesting in 3 seats --Nenmara, Kunnamkulam and Dharmadam and the party had surrendered the Nattika seat to the congress, while the SJ(D) would put up candidates in 6 constituencies -- Vatakara, Nemom, Mattannur, Kuthupramba, Kalpetta and Elathur.

The Congress will decide on the candidate for Nattika after consulting the party high command. With the addition of this seat, Congress would be contesting 82 seats in the polls.

Chandy said the Congress had fielded sitting MLA in Chittoor and so could not accept the demand of SJ(D) for that seat and CMP's demand for Azhikode also was not acceptable to it.

Chennithala said in some places protest meetings and demonstrations were held against the candidates list approved by the party high command. He warned that disciplinary action would be taken against party workers if similar protests continued. In Udumbanchola in Idukki district, the party candidate would be Josey Sebastian and in Shorunur Shyamala Jayaram, he said.

There was widespread discontent in the party over Sebastian's candidature, but the party stuck to its decision. In Shornur, there were reports that front would support M R Murali, leader of Janakeeya Vikasana Samiti, a platform of CPI(M) rebels, who was expelled following his decision to cosy up to the Congress.

The salient features of the manifesto are:

1) BPL families to be given rice at rs one a kg while others would get at rs 2 per kg and 25 kg rice to be provided a month to ration card holders;

2) Setting up of Pepper and Horticulture boards;

3) Backdoor appointments to be reconsidered;

4) 10th standard students to be given free bi-cycles;

5) Interest free loans for purchasing computers and motorbikes for students;

6) Kochi metro project will be made a reality;

7) Within one year, ensuring that electricity connections to all households and;

8) Exploitation of other state state lotteries to be stopped. 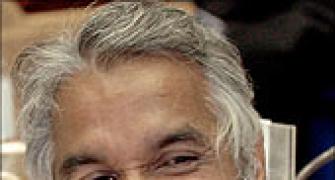 'Blame Left for the surge of extremism in Kerala'
When Congress had a close shave in Lok Sabha
Malkangiri collector linked with Maoists, says BJP