Masked men and miscreants went on a rampage in different parts of Kerala on Friday during the dawn-to-dusk hartal called by the Popular Front of India, under the lens for alleged terror activities, damaging state-run buses and ambulance, injuring policemen and commoners and vandalising shops and threatening the public. 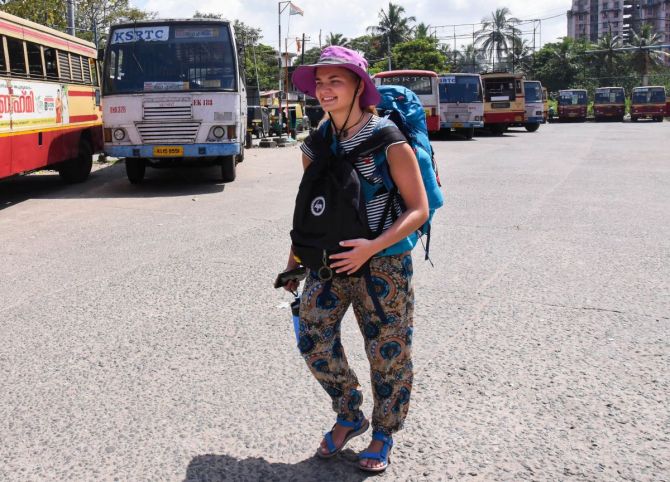 IMAGE: A foreign tourist at the Ernakulam bus stand of Kerala State Road Transport Corporation, during the hartal called by Popular Front of India (PFI) in protest against the nationwide arrest of its leaders by National Investigation Agency and Enforcement Directorate, in Kochi, Friday, September 23, 2022. Photograph: PTI photo

The Kerala High Court took cognizance on its own, the "illegal" hartal, and initiated a case saying the flash protest was prima facie a contempt of court as it violated a 2019 HC order on such agitations.

The violent incidents affected normal life in many parts of the southern state, a day after the National Investigation Agency led multi-agency pan-India raids against PFI, accused of being a radical islamist outfit, arresting over 100 persons.

The court, which said holding hartals were banned by it earlier, also directed the state administration to take stern action against those who violate the court order banning hartals. 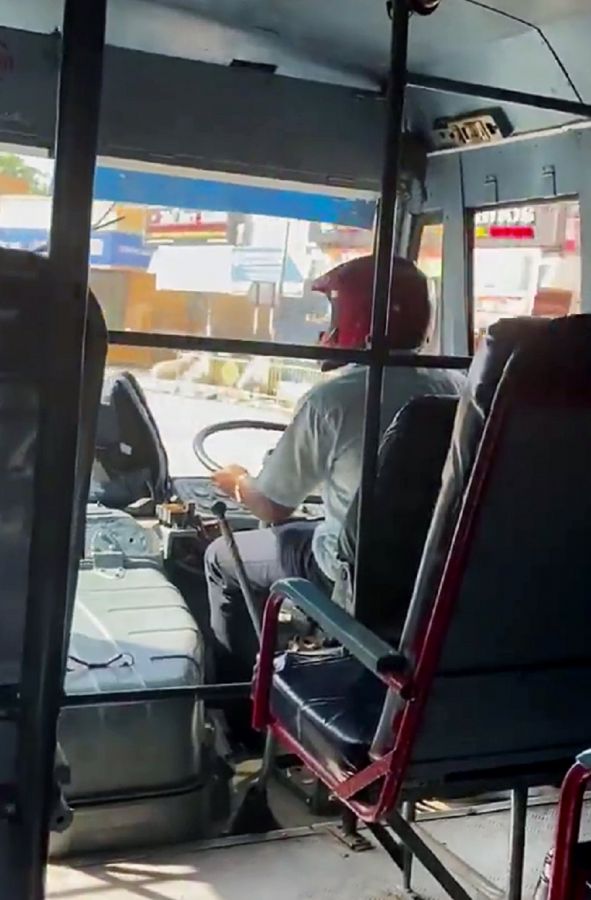 IMAGE: KSRTC bus driver wears a helmet to shield himself as stones were pelted during the one-day state-wide hartal called by PFI, in Kochi, September 23, 2022. Photograph: ANI Photo

An ambulance was not spared from stone-pelting in Thrissur district, causing concern.

At least 50 KSRTC buses were damaged with their windscreens smashed and seats damaged. Over 10 of its employees suffered injuries in the stone pelting and related incidents, official sources said.

The KSRTC management put out a Facebook post against the attack on its buses, and the drivers could be seen plying the vehicles wearing helmets in many places to escape from the stone pelting.

In Erattupetta town of Kottayam district, police had to resort to lathi-charge to disperse activists supporting the hartal when they tried to block vehicles after gathering in large numbers, closed the shops and threatened the people who were travelling in private vehicles.

A hartal supporter allegedly hit two police personnel, who were on patrolling duty, with his motorcycle when they tried to stop him from abusing commuters at Pallimukku in Kollam.

Though he managed to escape from the spot, a manhunt was on to nab him, police said.

A lottery shop, kept open at Sankranthi Kavala in Kottayam, was destroyed by miscreants while some freight lorries, which were on their way from Mangaluru, were stopped and their keys snatched away by them on a national highway in Kannur which blocked traffic in the area.

Local media reported that a petrol bomb was hurled at a vehicle which was carrying newspapers for distribution at Narayanpara and a country-made bomb was thrown at a local BJP office in Mattannoor by unidentified persons- both in Kannur district.

A 15-year-old girl and an auto-rickshaw driver suffered minor injuries in the stone pelting allegedly by PFI activists in Kozhikode and Kannur respectively.

A lorry driver, who was on his way to Erode in Tamil Nadu, suffered severe injuries on his nose and eyes in stone-pelting stones in Kozhikode.

"They attacked us deliberately with an intention to destroy the lorry. The vehicle was parked on the roadside when they came and attacked it. I went to a private hospital for first aid and now I am going to the government hospital for a detailed check-up," he said.

In Kannur, a group of PFI activists were beaten up by local people when they tried to forcefully down the shutters of shops. Angry local people reacted strongly when the protesters asked them to close the shops, beat them up and handed one of them to the police at the Central Bazar in Payyannur in this politically-volatile northern district.

Following PFI's hartal call made on Thursday, the state police chief had given directions to beef up security across Kerala and to take stern action against those who violate the law.

However, there were complaints that police did not act swiftly in many places when miscreants tried to block vehicles and forcefully shut down the shops on Friday.

DGP Anil Kant said the law and order situation in the state was under control and additional forces were deployed in place wherever it was required.

Sources said a large number of the activists of the PFI and the Social Democratic Party of India were taken into custody by police across the state for breaking laws and engaging in violence on the hartal day.

However, their exact number is yet to be revealed by the police.

The PFI on Thursday had said a hartal will be observed in the state today "against the RSS-controlled fascist government's attempt to silence dissenting voices using the central agencies".

Multi-agency teams spearheaded by the NIA had arrested 106 functionaries of the PFI on Thursday in near simultaneous raids at 93 locations in 15 states for allegedly supporting terror activities in the country.

Kerala, where PFI has some strong pockets, accounted for the maximum number of 22 arrests, officials said. 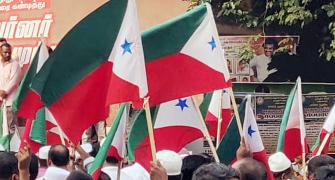 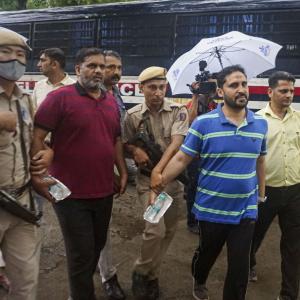 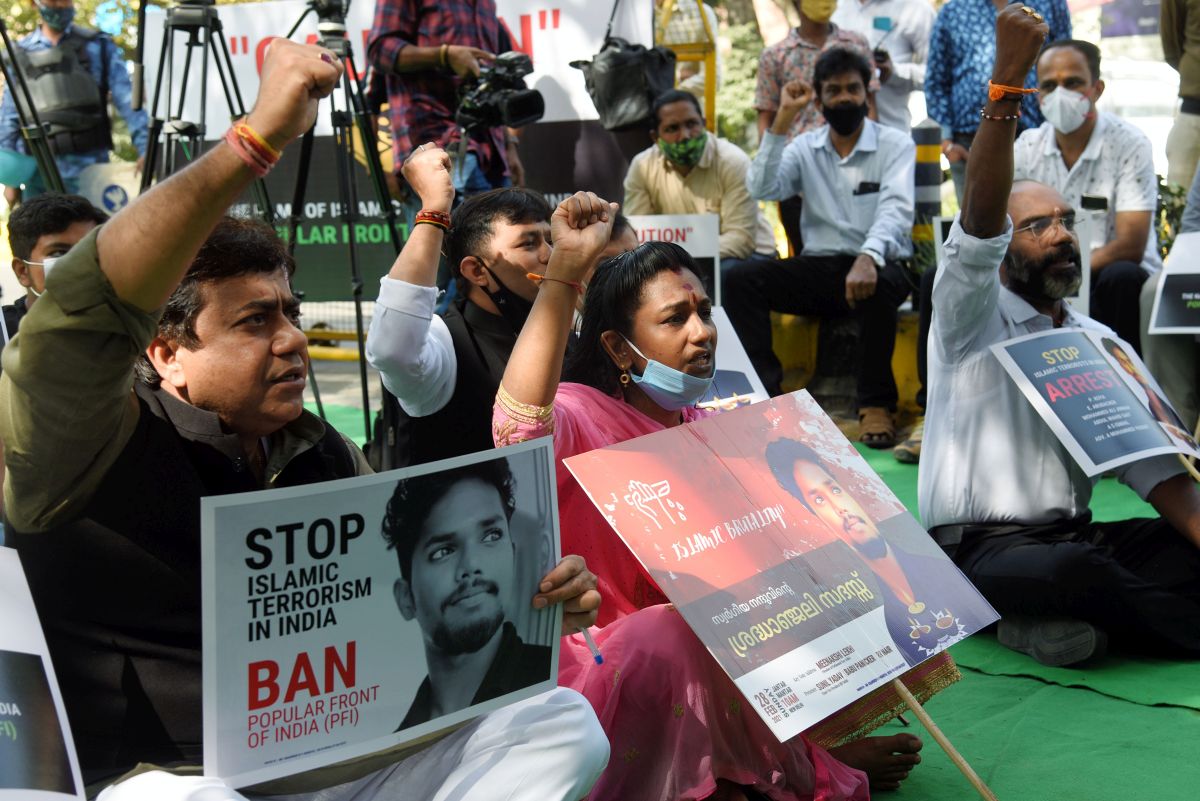