The Centre on Wednesday appealed to Tamil Nadu and Kerala to amicably settle the issue of Mullaperiyar Dam between them and expressed its willingness to play a role of "facilitator".

"It is amongst themselves that the matter can be sorted out. We can only play a role of facilitator. We want the matter to be sorted out amicably between the two states," Union Water Resources Minister Pawan Kumar Bansal told reporters, stressing that water was a state subject.

"There is no power with government of India to impose any decision of its own," Bansal said and added that the Centre could not take any action till Supreme Court-appointed special committee headed by Justice A S Anand looked into the safety aspect of the dam.

Meanwhile, MPs from Kerala on Wednesday decided to take up the matter with Prime Minister Manmohan Singh.

The decision of the Kerala MPs to meet Singh came after Dravida Munnettra Kazhagam MPs raked up in the Lok Sabha the issue of a film based on damage wreaked by the collapse of a dam and demanded a ban on its  release. The members complained that the film was based on the story of Mullaperiyar Dam, over which Tamil Nadu and Kerala are locked in a legal dispute.

Senior Congress MP P C Chacko said all Kerala MPs will meet Prime Minister to demand that Kerala should be allowed to construct a new dam in place of the existing structure which is weakened by the recent tremors, posing a threat to not only the livelihood but lives of millions of people.

"We will meet the prime minister. We have already sought an appointment," Chacko said. Tamil Nadu has always been opposed to constructing a new dam near the existing structure, which supplies water to its several southern districts.

Congress braces for a ROUGH winter in Parliament
Kanimozhi, others seek early hearing of bail pleas

'We will expose Chidambaram inside and outside Parliament' 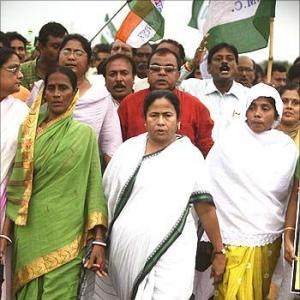 Should I give the Maoists rasogolla: Mamata Banerjee