Kerala Devaswom Board to challenge SC verdict on Sabarimala 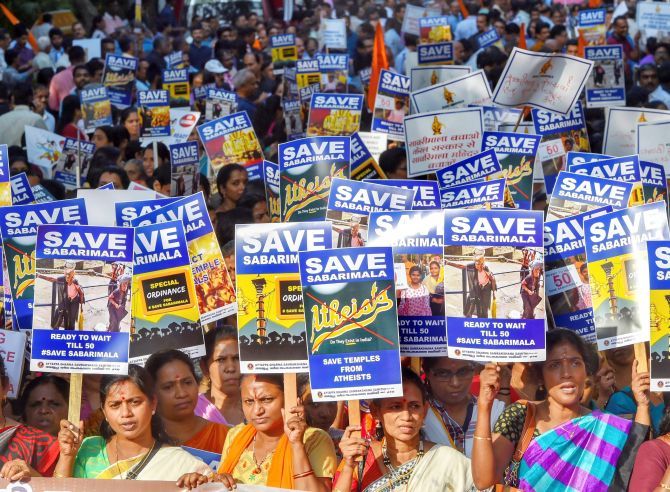 IMAGE: Lord Ayyappa devotees protest against the Supreme Court verdict on the entry of women of all ages into the Sabarimala Lord Ayyappa Temple. Photograph: Shahbaz Khan/PTI Photo

The Travancore Devaswom Board, which is the regulatory authority of all Hindu temples in Kerala, on Friday announced that they will appeal against the Supreme Court's verdict allowing women of all ages to enter the Sabarimala Temple.

TDB president Padmakumar said the board would file a detailed report in the apex court on the situation at Sabarimala and adjoining areas when the government tried to implement the order. It would also file a similar report in Kerala high court with a view to resolving the present crisis.

"The TDB is for resolving the issue and there is no politics for the board..."

Asked if the board would file a review plea against the apex court order, he said the TDB was a respondent in all the review petitions filed against the present judgment and now pending in the supreme court.

The apex court had on September 28 allowed females between 10 and 50 (in their reproductive phase) years of age to enter into the temple. However, no woman of menstruating age has yet been able to enter the shrine owing to the protests across the state.

A number of devotees blocked the entry of women trekking up the hill to the Lord Ayappa shrine. The doors of the temple opened on Wednesday at 5 pm, and will close on October 22.