He also asked the Congress to make up its mind on the statehood issue.

Rao, the political face of the pro-Telangana movement, and his supporters held the sit-in and 'observed silence' at Rajghat for a few hours on the occasion of Gandhi Jayanti to highlight the "grave situation" in Telangana region in Andhra Pradesh.

Scores of TRS cadres and statehood supporters descended upon Rajghat at around 10 am, where earlier top leaders joined a prayer meeting on the occasion of Gandhi Jayanti.

Rao, who is camping in New Delhi since Friday hoping to meet Prime Minister Manmohan Singh and other senior UPA ministers demanding an early decision on the separate state issue, said there was no need for "further consultations" on it.

"I will meet the Prime Minister to tell him what is happening in Telangana. I will also tell him that people are suffering there and an early decision on Telangana is the need of the hour," he told reporters after holding the sit-in.

"What is the need for further consultations? How long will they take for a decision? Our people are suffering and dying in Telangana and here people want discussions. We need Telangana, not comforting words," he said when asked to comment on the government's contention that "further consultations" were needed on the issue.

TRS MLA and Rao's son K T Ramarao told PTI that there was no need for further consultation on the issue as observed by Finance Minister Pranab Mukherjee and his cabinet colleague Ghulam Nabi Azad.

"There is absolutely no need for further consultation. Congress has to make up its mind on the issue. Once it makes up its mind the issue will be settled. The NDA has said it on the floor of Parliament that it would support a Bill on the formation of Telangana state if it is brought to the House. So there is no need for more discussion," Ramarao said.

"The Bill needs only simple majority. But, if the NDA supports the Bill it will be passed with two-thirds majority. So it is the Congress which has to decide, not others," he said.

The young TRS MLA said his father and Kothandaram would present the "right picture" to the Prime Minister when they meet him on the situation in the Telangana region.

He alleged that Andhra Pradesh Chief Minister Kiran Kumar Reddy has not been providing the "right picture" to the Centre and has been "misleading" everyone by his public statements.

"Life in entire Telangana has been crippled for the past three weeks. But the Chief Minister says situation is under control. So, we want the Prime Minister and others to know the right picture of what is happening there and we will brief him," he said.

Ramarao said when people's aspirations are not met in a Parliamentary democracy, things could reach "unwanted proportions" and then it would be difficult to control.

Centre's delay in announcing the formation of a separate Telangana state.

Mukherjee and Azad had on Saturday said more consultation is needed on the issue and that they would need some time.

Azad also said it was not an "easy decision" to take. 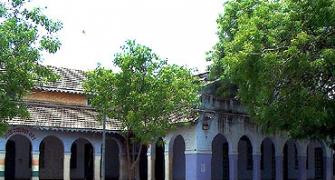 The lust for land has not spared the Mahatma
TRS chief to meet PM, Swaraj over Telangana row
Telangana crisis: Azad submits report to Sonia