'Kathua perpetrators acted as if law of jungle prevalent'

Holding that perpetrators of the gangrape and murder of a girl in Kathua acted as if there is a "law of jungle" prevalent in the society, judge Tejwinder Singh summed up the enormity of the crime with a touching couplet by Mirza Ghalib which says that hunters had placed the net near a nest and the young one was caught before it could take its first flight. 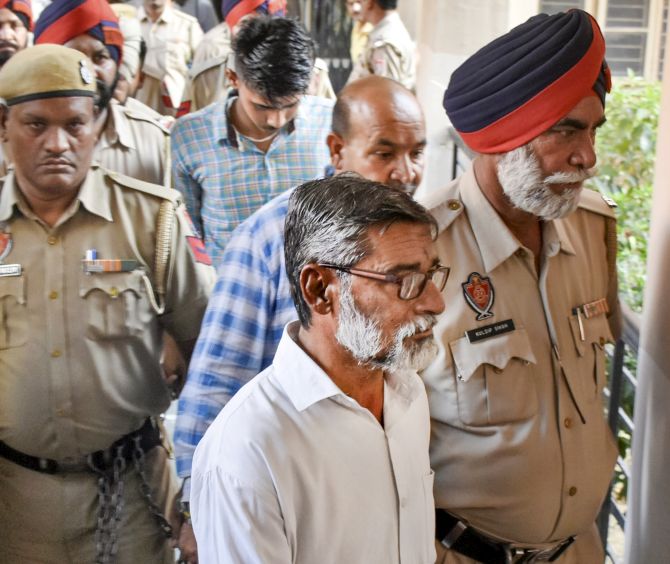 IMAGE: Kathua rape case main convict Sanjhi Ram along with other convicts being taken to the District and Sessions Court for the pronouncement of the quantum of punishment in Pathankot, Punjab. Photograph: PTI Photo

In his judgment after hearing arguments from both sides for 367 days, Singh sentenced three accused to life imprisonment for criminal conspiracy and murder and three more to five years in jail for destruction of evidence.

One accused was acquitted.

Also cited by the Supreme Court in a 2011 case of murder of a sex worker in West Bengal, the couplet poignantly summed up the Kathua case which shook the conscience of the nation.

Singh said the couplet applies squarely to the facts of the present case.

"An unfortunate kidnapping, drugging, wrongful confinement, rape and murder of an eight-year-old girl has set the criminal law into motion and have put the accused persons under "Sword of Damocles' for a fair trial," he said.

After an in-camera trial which was held out of media gaze as per instructions of the Supreme Court, Singh delivered his judgement on Monday.

Sanji Ram, the mastermind and caretaker of the 'devasthanam' (temple) where the crime took place in January last year, Deepak Khajuria, a Special Police Officer, and Parvesh Kumar, a civilian -- the three main accused -- were given life term.

Three police officers were sentenced to five-year imprisonment for cover up and destruction of evidence while Ram's son Vishal was acquitted.

"In the present case, facts are many but truth is one that under a criminal conspiracy, an innocent eight-year-old minor girl has been kidnapped, wrongfully confined, drugged, raped and ultimately murdered. The perpetrators of this crime have acted in such a manner as if there is a 'law of jungle' prevalent in the society," Singh said.

The 15-page chargesheet filed in April last year said the girl was kidnapped on January 10 that year and was raped in captivity in a small village temple, exclusively manned by Ram, after keeping her sedated for four days. She was later bludgeoned to death, it said.

The crime branch of J&K Police had filed the chargesheet against eight persons, including a juvenile.

The trial against the juvenile is yet to begin as his petition on determining his age is to be heard by the Jammu and Kashmir high court.