Actress Katharine Hepburn, who won a record four best actress Oscars during a career that spanned much of the last century, died on Sunday at her home in Connecticut at the age of 96, a family member said.

Hepburn, whose health had been in decline for some time and had not spoken for several days, passed away peacefully, her brother-in-law, Ellsworth Grant, said.

"She's the greatest actress of her age and with her passing that whole galaxy of great movie stars has ended," Grant, who saw the screen legend shortly before she died, told Reuters.

He said the cause of death was 'simply complications from old age'.

Seven years ago Hepburn moved back to the family mansion in Fenwick, an upper-class borough of Old Saybrook on Long Island Sound.

She lived a quiet, reclusive life there and was rarely seen in public. Friends and relatives said she suffered from short-term memory loss. 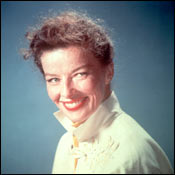 "There will be no memorial service and her burial at a later date will be private... She died as she lived, with dignity and grace," McFadden said.

Hepburn won her first Academy Award in 1933 for Morning Glory. She won again for Guess Who's Coming to Dinner, The Lion in Winter and On Golden Pond. She

was nominated for the award on eight other occasions.

She played opposite such leading men as James Stewart, Humphrey Bogart, John Wayne and Henry Fonda. But it is with Spencer Tracy that her name will forever be linked. Not only did she make nine films with Tracy, but for 27 years she was the 'other woman' in his life.

Tracy, a Roman Catholic, would not divorce his wife. Hepburn, in a 1991 interview with ABC television, said she loved Tracy, but did not remember if he had ever told her he loved her. "We lived openly enough together," she said. "I certainly had no intention of breaking up his relationship with his wife."

Irreverent and feisty, Hepburn always spoke her mind. Her independent spirit made her a role model to many women, and she was voted America's most admired woman in a 1985 Ladies Home Journal survey.

Hepburn also starred in film classics like Little Women and The African Queen. Her last film was Love Affair with Warren Beatty, released in the early 1990s.

The actress did not escape criticism, however. Her performances were sometimes called cold, and Dorothy Parker famously said of Hepburn that she displayed "the gamut of emotions from A to B".

President George W Bush and the first lady paid tribute to her. "Katharine Hepburn delighted audiences with her unique talent for more than six decades. She was known for her intelligence and wit and will be remembered as one of the nation's artistic treasures," a statement from Bush said.

Hepburn left a sister, a brother, and 13 nephews and nieces.