News
Business
Movies
Sports
Cricket
Get Ahead
Money Tips
Shopping
Sign in  |  Create a Rediffmail account
Rediff.com  » News » 'If we were Lashkar, would it be difficult for us to murder troops?'

'If we were Lashkar, would it be difficult for us to murder troops?' 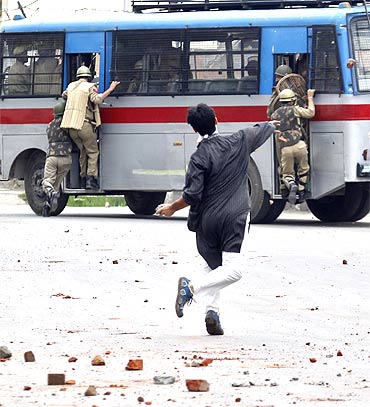 Kashmiris in New Delhi speak to Sahim Salim about why the current phase of violence in the valley is different from the previous ones.

"There never was calm in the valley; it merely was a lull."

"When you station two securitymen outside every home in Kashmir, censor their mobile phones, enforce a curfew that in all practical sense is a bandh for days, then you get calm. But then you also get a state full of people who have been denied their basic rights," says Zahid Rafiq, a Kashmiri journalist working in the national capital.

Kashmir has erupted once again. Kids, who look like they can barely carry their schoolbags, stand defiantly against men in uniform.

Frantic meetings between the state and central governments have only resulted in one option -- impose a curfew.

That, however, is the one thing the state is failing to enforce as scores of demonstrators take to the streets.

The last four days have seen several deaths in the valley after about two-and-a-half weeks of calm. Over 30 protestors have died in the last two months.

"You are telling me about two-and-a-half weeks of calm. Let me tell you, Kashmir has been in a state of bandh for the past 41 days. New Delhi was crippled in the one-day bandh observed recently. Imagine 41 such days, only more severe!" exclaims Sohail Mir, a Kashmiri student at Delhi University.

"There have been many dead, but there are also people injured in the violence who live to tell the tale. Others, seeing an injured man bleeding, are no longer scared. That is what is alarming. People are not afraid of the State. Curfew only works when the State can inculcate fear in people's minds," feels Samir Shahi, a Kashmiri artist.

Many Kashmiris are shocked by the state and central governments's attempt at labelling the protests as sponsored by the Lashkar-e-Tayiba.

"New Delhi is lying to the Kashmiris and the rest of India when it says that our protests are sponsored by external forces. Our protests and our anger have been going on for the past 22 years. The state government tried to suppress it by forcing our men inside, by raping our women and by killing our children. But Kashmiris kept erupting. Whenever they got the chance, people took to the streets," says journalist Jehangir Ali, who is in Kashmir at the moment.

"If our protests were Lashkar sponsored, don't you think we would be using sophisticated weapons against the forces? How come only civilian deaths have been reported in the last two months and no security fatalities? If we were indeed Lashkar, would it be very difficult for us to murder the troops?" asks Zahid.

Chief Minister Omar Abdullah, after a meeting with the prime minister and other senior Union ministers on Monday, said he has sought additional paramilitary forces, especially the Rapid Action Force, to deal with street protesters.

"This what the government does not understand," says Samir Shahi. "When the atrocities began, we dealt it with patience, then with tolerance and now that it is not stopping, we are revolting. We are not afraid anymore."

"Look at the situation," he adds. "Earlier, people from select areas used to protest; the security forces knew areas like Downtown, Sopore etc were sensitive. Now, people are protesting everywhere. You can't impose curfew on the state's entire population and kill them all."