A day after the terror attack in Kabul targeting Indians, Afghan President Hamid Karzai today called up Prime Minister Manmohan Singh and assured him that extra measures would be taken to ensure the safety of Indians there.

Karzai called up Singh to express condolences on the loss of lives in the attack and the Indian leader requested him to ensure full protection for Indians in Afghanistan. Singh conveyed India's "outrage" at the incident, PM's Media Adviser Harish Khare said.

Karzai said the government and the people of Afghanistan were "deeply grieved by the loss of four Indian health workers who were honestly serving the people in Afghanistan," a statement issued by the President's office said.

"Assuring the Prime Minister of full investigation, the President said Afghan government would take extra measures for the safety of its international partners so such incidents do not happen again," the statement said.

The two leaders agreed to stay in touch with other, Khare added.  Taliban had carried out coordinated attack on two hotels in Kabul which were rented out by Indians associated with the development works in that country. Up to nine Indians were among 17 people killed in the attack.

Singh had yesterday condemned the terror strike saying it was a "senseless act of violence and barbarism" targeting those who were on a "mission of goodwill and friendship, helping to construct a peaceful, democratic Afghanistan that our Afghan friends desire". 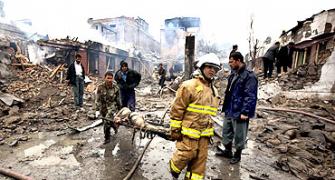 Were the Pune and Kabul blasts interlinked?