On a visit to New Delhi a year after UPA-II assumed office, Tamil Nadu Chief Minister M Karunanidhi on Sunday backed Telecom Minister A Raja and virtually ruled out the demand of the Opposition for his resignation over the 2G spectrum controversy.

"I have not come here with any good news to be conveyed to you people," he said sarcastically in Tamil when asked to comment on Opposition demands for Raja's resignation over the spectrum issue. He also parried a query on whether the issue would figure during his discussions with Prime Minister Manmohan Singh and Congress chief Sonia Gandhi.

He was talking to reporters at the Tamil Nadu House after a meeting with President Pratibha Patil, during which he extended invitation to her to attend the inaugural ceremony of the 9th World Tamil Conference to be held in Coimbatore in June.

The chief minister is expected to meet both Singh and Gandhi either this evening or tomorrow morning.

His remarks on Raja come days after the entire opposition stalled Parliament proceedings over a newspaper report, which claimed that the CBI has evidence against the minister in the spectrum case.

This is his first visit to the national capital after he left Delhi in a huff last May saying Congress' formula on Cabinet berth allocation was not acceptable. But six days later, seven DMK nominees were inducted into the cabinet after the two parties patched up.

When asked to comment about his son and Union Chemicals and Fertilisers Minister M K Alagiri's continued absence from Parliament, Karunanidhi merely said, "You ask him."

Pressed for his comments on the issue and asked for his views on it as the DMK chief, he shot back, "Let him first give his opinion. Then I will give mine."

DMK sources said he is expected to raise with Singh and Gandhi the issue of early passage in Parliament of the Tamil Nadu Assembly's resolution to revive Legislative Council in the state. The resolution has to be passed in both Houses of Parliament with a two-thirds majority. 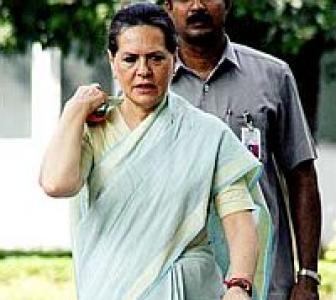