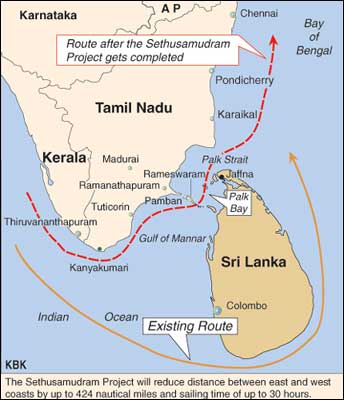 Dravida Munetra Kazhagam chief M Karunanidhi on Tuesday accused the Jayalalithaa-led Tamil Nadu government of adopting 'double-standards' by opposing the Sethusamudram project in the Supreme Court and said it was a 'betrayal' of the state.

"The All India Anna Dravida Munetra Kazhagam government had made a written submission in the Supreme Court saying the project was not at all needed," Karunanidhi, a staunch supporter of the multi-million rupees controversial project, said in a statement here.

Holding that the AIADMK had supported the project in its 2001 and 2004 election manifestos saying it would cut down journey time of ships besides attracting foreign investment, he said it later changed its stance only to deny credit to the DMK which was instrumental in kickstarting work on the project, which has evoked opposition from some quarters over demolition of mythical Ram Sethu or Adam's Bridge.

"This is a betrayal of the state by the chief minister who is hell-bent on burying a project that will augur well for the state's welfare," he said.

The Sethusamudram Shipping project is aimed at constructing a shorter navigational route around India's southern tip by breaching the Ram Sethu, said to have been built by Lord Rama's army of monkeys and bears to Ravana's kingdom Lanka.

"Thinking that the fruition of the project would bring good name to the DMK and other movements which had continuously voiced support for it, the AIADMK adopted double-standards and finally told the Supreme Court in writing that the project was not required," Karunanidhi claimed.

The 'dream-project' of Tamils was supported by DMK founder and late Chier Minister C N Annadurai and it had been considered since 1960 before finally works started in 2005, he said adding experts' suggestions on cutting through Adam's Bridge or Ramasethu had been accpeted for viability reasons.

"With so much of thought by experts and scientists having gone into the project besides the Central government allocating crores of rupees, Jayalalithaa after a day's research has filed a petition in the Supreme Court saying the project was not required at all," Karunanidhi said.

She had done a similar 'flip-flop' over the Kudankulam Nuclear Power Plant, he charged.     Jayalalithaa has been opposed to the dredging of Ram Sethu due to the site's 'immeasurable historical, archaeological and heritage value,'and had demanded that Centre declare it as a national monument.

"In view of the strong objection raised to the earlier alignment due to its archaeological, historical and cultural importance, I request you to take necessary action to communicate the views of the government of India to the Supreme Court that it would take immediate steps for declaring the site as a National Monument without any further delay," she had urged Prime Minister Manmohan Singh in a letter in March 2012.

The Supreme Court, hearing a batch of petitions against the project, on Monday granted another six weeks to government to apprise it of its stand on the project about which a high-level committee has said that an alternative alignment, other than the one through Ram Sethu, is not economically and ecologically feasible.
PTI
Source: PTI© Copyright 2022 PTI. All rights reserved. Republication or redistribution of PTI content, including by framing or similar means, is expressly prohibited without the prior written consent.
Related News: Supreme Court, Ram Sethu, DMK, M Karunanidhi, Dravida Munetra Kazhagam
Print this article
In Tamil Nadu, the CM has power, the people don't
Air India bomb maker asks court to overturn conviction 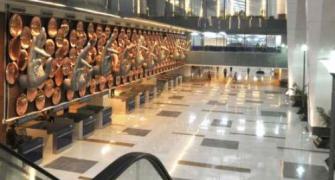