MLA worth Rs 40 lakh is the poorest in Karnataka 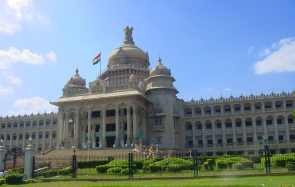 The average asset of the 92 re-elected members of Legislative Assembly in Karnataka is estimated at Rs 30.15 crore, according to the Association for Democratic Reforms and Karnataka Election Watch analysis.

The assets of D K Shivakumar of the Congress from Kanakapura constituency have seen the maximum growth. He has declared a Rs 175.9 crore increase in assets. From Rs 75.5 crore in 2008 his wealth has risen to Rs 251 crore in 2013.

Three re-elected MLAs have shown a decrease in their assets.

Priya Krishna of the Congress from the Govindrajnagar constituency has declared assets worth R. 910.98 crore, the highest in the state, followed by N Nagaraju (MTB) from the Hosakota constituency whose assets are worth Rs 470.13 crore.

Third on the list is Congress’ Anil Lad from Bellary city with wealth worth Rs 288.98 crore.

The poorest MLA in the state is Doddamani Ramakrishna Shidlingappa, whose assets are valued at Rs 40.67 lakh.

A total of 21 MLAs out of the 218 analysed have declared liabilities worth Rs 10 crore and above.

MLAs who have declared their income:

Seventy-four of the 218 MLAs analysed have declared criminal cases against them.  In 2008, 20 per cent MLAs had criminal records.

Three out of six KJP MLAs are criminals, the BSRC has two such MLAs of the four.

The lone elected MLAs from SP, Karnataka Makkal Paksha and the Sarvodaya Karnataka Party all have criminal cases against them.

Out of the 74 MLAs with criminal cases, 39 MLAs have serious criminal cases against them like attempt to murder, kidnapping, dacoity, assault against women etc.

Education: Thirty-eight out of 218 (63 per cent) MLAs analysed are graduates and have higher qualifications.

Age: A total of 17 MLAs fall in the age bracket of 40 or less. A total of eight MLAs out of the total analysed are 70 years or above.

Women MLAs: Out of all 218 MLAs, five (two per cent) are women. The Congress and the BJP both have two women MLAs followed by the JD-S with one woman MLA. In 2008, three women MLAs were elected.

INFOGRAPHIC: How the BJP lost Karnataka