Kannauj: No BJP candidate in fray against Dimple Yadav

Source: PTI
June 06, 2012 16:23 IST
The Bharatiya Janata Party, which had decided against contesting the Kannauj Lok Sabha by-election made a U-turn at the eleventh hour to enter the fray but its candidate Jagdev Yadav failed to file his nomination papers, the deadline for which ended on Wednesday.

Yadav, who was declared the party candidate by the central leadership at the last minute could not reach the returning officer's office to file the papers which closed at the 3 pm deadline.

Besides the SP candidate Dimple, only one candidate Dashrath Singh is in fray from Sanyukt Samajwadi Party. The withdrawal of candidature could be made by June 8.

Dimple is set to win the seat, as the Congress and the Bahujan Samaja Party have also not put up candidates.

BSP too decides to not contest against Dimple in Kannauj 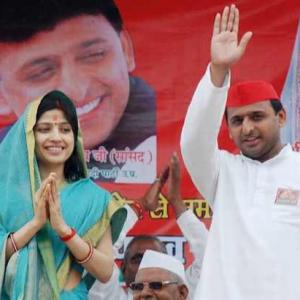