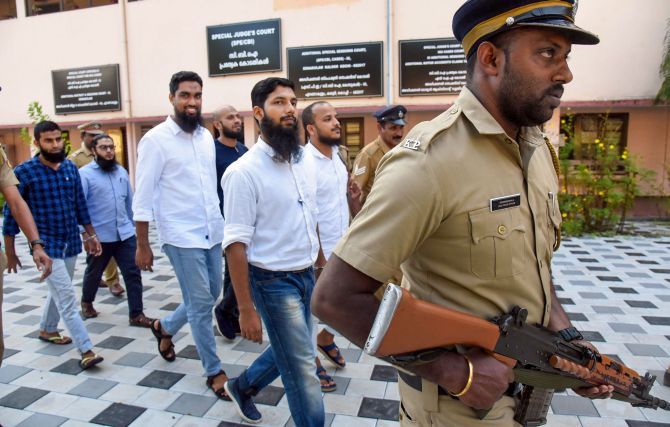 IMAGE: Police take away the Kanakamala Islamic State (IS) module case accused after they were produced in an NIA court in Kochi, on Wednesday. Photograph: PTI Photo

A special National Investigation Agency court in Kochi on Wednesday awarded 14-year rigorous imprisonment to a man arrested in connection with a conspiracy to carry out terror strikes across Kerala and neighbouring states in 2016.

One accused in the case, Jasim N K was acquitted.

They were arrested by the National Invesitgation Agency in the Kanakamala IS terror plot case.

Special judge P Krishna Kumar said they 'arrogate themselves to the merchants of death for flourishing their perverted ideas in this land of literature and secularism'.

The court also slapped a fine of varying amounts on each of the convicts.

It has found that they had not joined the ISIS but made it clear that they were qualified to be called as members of a terror gang.

"This is a case which is found that all the convicts had orchestrated a plan to support ISIS, a terrorist outfit. It is almost an inviable rule that in such cases, while awarding sentence, a sympathetic approach is out of place," the judge said.

The Court appreciated Chief Investigating Officer A P Shoukkathali for the brilliance he had shown during investigation into the case.

It observed that prime accused Manseed who masterminded most of the criminal acts in the case deserves a stringent punishment than all others.

"When the chat conversations in the telegram group were examined, it was found that he had motivated, enticed and incited all others into his plan apart from devising a detailed plan to execute their task," the court said.

Highlighting the role played by second accused Swalih Mohammed in the case, the Court said he was ready to receive gun and poison, apparently from the ISIS mercenaries, for the attack they planned against foreign Jews at Vattakkanal in Kodaikkanal.

"It is disheartening that some of the convicts arrogate themselves to the merchants of death for flourishing their perverted ideas in this land of literature and secularism. It is often said that sunlight is the best disinfectant. Let us hope that sunlight will also instill sanity to these young men who mistook the sacred religious sanctions for a call for crime," the court said in its judgment.

The NIA had busted the IS module from Kanakamala in Kannur district in October 2016 when they were holding a meeting to plan terror attacks against prominent persons, including judges, police officers and politicians, and foreign tourists.

A case was registered at the NIA police station in Kochi on October 1, 2016 against eight people hailing from Kerala and Tamil Nadu, besides other unknown persons.

The day after, five accused -- Manseed Mehmood, Swalih Mohammed, Rashid Ali, Safvan P and Jasim N K -- were arrested from Kanakamala within Chockli police station limits of Kannur, while they were conducting a secret meeting of the ISIS/Daesh module as part of preparations to wage war against the government of India.

A charge sheet was filed against all the accused, besides the absconding Shajeer Mangalassery, under various sections of the Indian Penal Code and the Unlawful Activities (Prevention) Act.

The accused had organised themselves into a terrorist gang, owning allegiance to the ISIS/Daesh, named Ansarul Khilafa-Kerala that was headed by Mangalassery, who had performed hijra (migration) to Afghanistan from the United Arab Emirates in June, 2016 to join and support the ISIS/ Daesh. 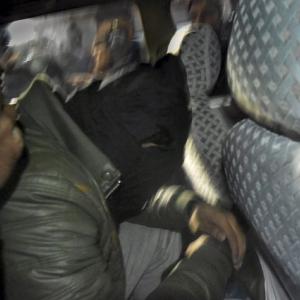