'No judge can take up a matter on its own unless allocated by the CJI as the CJI is master of the court,' the top court said.

The tussle within top judiciary on Friday came to the fore with the Supreme Court overturning the order of a two-judge bench to set up a larger bench to hear a graft case allegedly involving judges, asserting that Chief Justice of India was the 'master of the roster'.

The showdown was over the issue of supremacy of constituting a bench in which the authority of Chief Justice Dipak Misra was allegedly undermined by a bench of Justices J Chelameswar and S Abdul Nazeer, which had on Thursday set up a five-judge bench to hear a case of alleged bribery of judges in which a retired judge of Orissa high court is an accused.

Justice Chelameswar, who is the senior-most judge after the CJI, had ordered setting up of the five-judge bench of top judges of the apex court as a petition by an NGO and an advocate had claimed there were allegations against Justice Misra.

However, in a dramatic development, the CJI on Friday set up a five-judge bench headed by him and overturned Thursday's order of the two-judge bench, saying the Chief Justice had the sole prerogative of setting up a bench and allocating matters.

In fast-paced events, the five-judge bench, also comprising Justices R K Agrawal, Arun Mishra, Amitava Roy and A M Khanwilkar, assembled at 3 pm and commenced an urgent hearing on the question as to who can direct the setting up of a bench of specific judges to hear a particular matter.

"Needless to emphasis that no judge can take up a matter on its own unless allocated by the CJI as the CJI is master of the court," the bench said and annulled the decision of the two-judge bench, in the hearing which witnessed heated exchange of words between the judges and advocate Prashant Bhushan, representing the petitioners.

"Any order passed contrary to this order (by the constitution bench) should not hold the field and shall be treated to be annulled," the CJI said in hard-hitting remarks while refusing the request of a lawyer to bar the media from reporting the case, saying he believed in 'freedom of speech, freedom of expression and freedom of press'.

The bench said if the principle of law, judicial discipline and decorum of the court was not followed, there would be 'anarchy' and 'chaos' in the administration of justice as well as the functioning of the institution.

Perturbed by Thursday's order, the CJI, without taking names of the concerned judges, said there were hundreds of matters listed in the court daily and if the orders were passed like this, then the court cannot function.

Members of the Supreme Court Bar Association, including its President R S Suri, vice-president Ajit Sinha, Secretary Gaurav Bhatia and several senior advocates including Ashok Bhan, Aman Sinha and others strongly countered the allegations levelled in the petitions and said strong action should be taken against any attempt to 'browbeat' the judges.

"Getting orders by terrorism should not be tolerated by this court. Strong action needs to be taken against any such attempt," SCBA members said while requesting the bench to initiate contempt proceedings in the matter.

The hearing in the jam-packed courtroom saw allegations flying thick and fast with Bhushan even raising his pitch while asking the CJI to recuse himself from hearing the matter as his name has allegedly figured in the Central Bureau of Investigation's first information report.

The CJI retorted by asking Bhushan, who was accompanied by advocate Kamini Jaiswal, one of the petitioners, to read the contents of the FIR and warned against losing his temper.

"We have been giving you indulgence and you cannot deny that, despite you levelling wild allegations against me. You can afford to lose your temper but we cannot," the CJI said.

Bhushan, who was representing an NGO 'Campaign for Judicial Accountability' and Jaiswal, seeking constitution of an SIT to probe the corruption case allegedly involving judges, said the CJI's name features in it.

"What FIR against me? It is nonsense. There is not a word in the FIR naming me. Read our orders first. I feel sorry. You are liable for contempt now," the CJI said.

Bhushan dared the bench to issue a contempt notice to him and said the hearing cannot be conducted in this manner without allowing him to speak.

The activist advocate was also rebuked by Justice Arun Mishra, who observed that FIR cannot be lodged against sitting judicial officer of lower courts, judges of the higher judiciary, the vice president of India or the President of India because they have immunity.

He said the contents of the petition filed before it was per se contemptuous.

Bhushan left the court in a huff midway during the hearing, alleging that he was not being allowed to speak while the court has heard 'all and sundry'. He was seen apparently being pushed and jostled while he was leaving the courtroom.

The CJI also said he had set up the five-judge constitution bench as a two-judge bench comprising Justices A K Sikri and Ashok Bhushan, while hearing a separate plea with similar allegations of bribery earlier in the day, had said that the matter should be placed before the CJI for passing an appropriate order.

At the fag end of the hearing, one of the bar members requested the bench to pass an order gagging the media from reporting the case, claiming it would tarnish the image of the institution which is a 'temple of justice'.

The CJI refused to accept the oral submission, saying 'I believe in freedom of speech, freedom of expression and freedom of press'.

"Prime facie, I am always of the view that freedom of speech and expression should be respected. I am not going to pass any order restraining the press," CJI Misra said.

The constitution bench also made it clear that the pleas regarding alleged bribes taken in the names of judges would be taken up by an appropriate bench after two weeks.

The CBI, in its FIR, has named several persons, including a former Orissa high court judge as accused in the alleged corruption case. 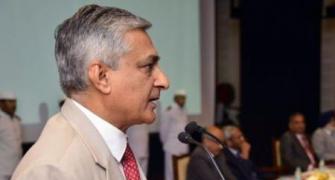 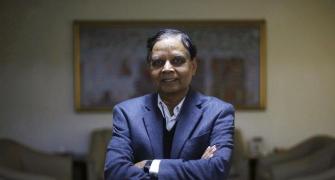 Reforms must in bureaucracy, police and judiciary: Panagariya