Judge who sent Kasab to gallows is now Maharashtra Lokayukta 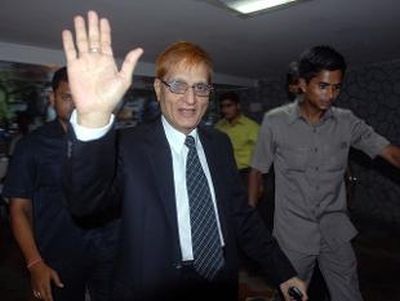 Justice Madanlal Laxmandas Tahaliyani, a retired judge of the Bombay high court, was on Monday sworn in as the new Maharashtra Lokayukta.

Governor C Vidyasagar Rao administered the oath of office to Justice Tahaliyani at a brief ceremony held at the Darbar Hall of Raj Bhavan in Mumbai.

The Supreme Court, in its judgement dated August 29, 2012, in the Mohammed Ajmal Amir Kasab versus State of Maharashtra case, had lauded the role of Justice Tahaliyani in conducting the trial proceedings and maintaining the record of the case in an exemplary manner.

The judgement delivered by Justices Aftab Alam and Chandramauli Kr Prasad records, "In the course of hearing of the appeal, we also came to know the trial Judge Shri Tahaliyani. From the records of the case, he appears to be a stern, no-nonsense person. But he is a true flag-bearer of the rule of law in this country."

Justice Tahaliyani was born on December 23, 1953, at Sardar Shahar in Rajasthan.

After obtaining his law degree, he started practising law in May, 1977, at Gondia and Chandrapur in Maharashtra.

He was appointed as Assistant Public Prosecutor at Gadchiroli on December 14, 1979, and worked in that capacity at Gadchiroli, Sironcha, Desaiganj and Warora.