An FIR has been registered against former Chhattisgarh chief minister Ajit Jogi in Bilaspur district, days after a government-appointed committee rejected his claim of being a tribal, police said on Friday. 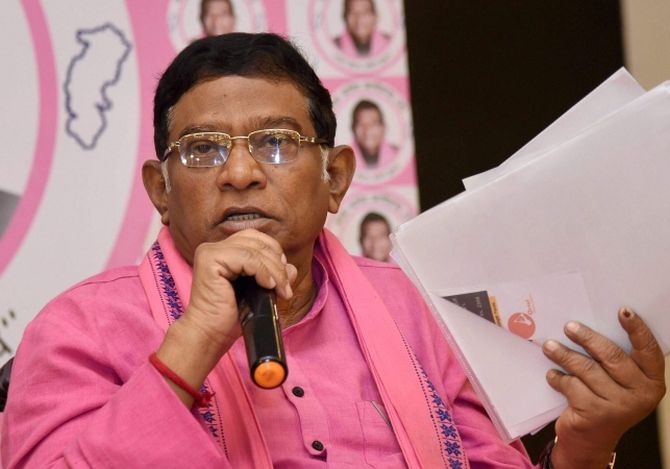 A high-level caste scrutiny committee set up by the state government had last week dismissed Ajit Jogi's claim of belonging to a Scheduled Tribe and cancelled his caste certificates.

Subsequently, Ajit Jogi, who served as the first chief minister of Chhattisgarh, has been booked for allegedly fraudulently obtaining caste certificates, the police said.

The 73-year-old politician's claim of being a tribal has been rejected multiple times in the past too.

The case against Ajit Jogi was filed on Thursday night under section 10 (1) of the Chhattisgarh Scheduled Castes, Scheduled Tribes and Other Backward Classes (Regulation of Certification of Social Status) Rules, 2013, at the civil lines police station on the direction of the district
administration, Bilaspur SP Prashant Agrawal said.

The FIR was lodged by T R Bhardwaj, tehsildar of Bilaspur, on behalf of district collector, he added.

The district administration has pointed out that the scrutiny committee had cancelled Jogi's caste certificates in its order dated August 23, he said.

The panel had authorised the Bilaspur collector to carry out necessary proceedings under the Chhattisgarh ST/SC/ OBC (Regulation of Social Status Certification) Rules, 2013 in the matter, Agrawal said.

Subsequently, the collector wrote to the tehsildar to lodge an FIR in this connection, the SP said.

However, Ajit Jogi, a sitting MLA and a former Congressman, is yet to be arrested as the investigation into the matter is underway, he added.

According to police officials, section 10 (1) is invoked against those who acquire caste certificate which later turns out to be invalid during scrutiny.

It's a non-bailable section, they said.

Reacting to the move, Amit Jogi, the son of Ajit Jogi, dubbed it as "political vendetta" and targeted Chief Minister Bhupesh Baghel over the issue.

Ajit Jogi is chief of the Janata Congress Chhattisgarh (J), a party floated by him after parting ways with the Congress in 2016.

"The state is being governed by the `rule of Bhupesh' not by the rule of law. The government is doing vendetta politics against my father, Amit Jogi alleged.

"We had filed a writ petition against the order of the high-powered committee in the HC on Thursday. Today (Friday) it will be mentioned in the HC, he added.

Notably, the scrutiny committee that looked into Ajit Jogi's caste status was formed on the order of the Chhattisgarh high court in 2018.

It concluded that Ajit Jogi had failed to substantiate his claim of being a member of the Kanwar community, a Scheduled Tribe. Hence, all the caste certificates declaring him to be a tribal stand cancelled, the official said, quoting the report.

In 2011, the Supreme Court had ordered the then Bharatiya Janata Party government in the state to form a high-powered committee to scrutinise Jogi's caste certificates.

The committee, headed by Reena Kangale, then special secretary of the Tribal and Scheduled Caste Development department, had held Ajit Jogi's caste certificates as invalid in June 2017.

The bureaucrat-turned-politician had moved the HC, which ordered that a new committee be formed to examine the case.

Following the latest decision, Ajit Jogi, the MLA from Marwahi, a Scheduled Tribes reserved seat, may lose his assembly membership.