The Delhi Police on Friday claimed that nine students seven of whom are from Left leaning bodies including Jawaharlal Nehru University Students' Union president Aishe Ghosh were identified as suspects in the violence in the varsity campus but did not name any group yet for the brutal attack by masked goons on students and teachers that left 36 injured. 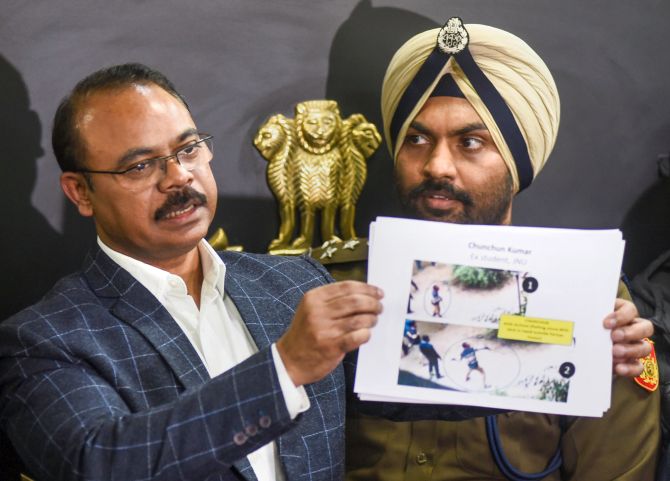 The preliminary findings in the probe by a special investigation team of the police which released pictures of the nine suspects were seized upon by three union ministers -- Prakash Javadekar, Piyush Goyal and Smriti Irani -- who said the "Left design" in the varsity has been "unmasked" by the evidence collected by the police.

Left leaders in turn accused the Delhi Police of being a "government stooge" and said the question still remained on the identity of the masked people photographed at Sabarmati hostel at the Jawaharlal Nehru University on Sunday and terrorising the campus for three hours with sticks, rods and sledgehammers.

The police also claimed that the January 5 violence was a fallout of the online registration process and that tension was brewing in the university since January 1.

The other two suspects named by police are Vikas Patel and Yogendra Bharadwaj. Police sources said the two are from the Rashtriya Swayamsevak Sangh-affiliated Akhil Bhartiya Vidyarthi Parishad.

However, no one has been detained.

Tirkey said notices will be served to all the suspects.

He did not take any questions after the media briefing.

The officer said Ghosh and eight others were involved in an attack at the Periyar hostel on January 5.

Tirkey said a Whatsapp group 'Unity Against Left', believed to have been formed while the violence escalated, is also under scanner.

The JNU Teachers' Association accused the Delhi Police of "underplaying" the violence and termed its version as "disturbing".

The Congress also accused the Delhi Police of conducting a "shoddy" investigation and alleged it was clearly influenced by the government.

Human Resources Development minister Ramesh Pokhriyal Nishank said involvement of JNU students in the violence as pointed out in the police probe was unfortunate.

Rejecting the charges against the Left leaning students, Ghosh, who was injured, said she has not done anything wrong and all this is being done to create a narrative.

On being named as one of the attackers during the violence, Ghosh, the president of the JNU Students' Union, said she too has evidence on how she was attacked.

She said the police was quick to take cognizance of the complaint filed by the JNU administration against her but has not registered any FIR on her complaint.

After meeting HRD ministry officials, Ghosh said the JNUSU stand on its demand for the removal of Vice Chancellor M Jagadesh Kumar stands but any decision on whether to call off the agitation against the fee hike will be taken later.

At his briefing, Tirkey admitted that lack of CCTV footage was a major hurdle in the investigation.

"The CCTV footage could not be fetched as the wifi based system and the cameras were all disabled."

He also said since the hostel rooms were specifically targeted, it indicates an insider's hand.

"The JNU is so vast that the outsiders cannot figure out the hostel room in the spur of the moment," he claimed.

"At around 11.30 am, four students were tensed and sitting on a bench in front of School of Social Science. A group came and there was an altercation between them over the admission process. The security staff who tried to save them also got injured," he said.

"At 3.45 pm, members of the four organisations went to Periyar Hostel and attacked the students there. Some JNUSU members were also there, including their president Aishe Ghosh," he said.

Inside Periyar Hostel, some specific students were targeted, police said.

Thereafter, there was a peace meeting in which 120 to 130 students and teachers participated outside Sabarmati T-point between the Periyar and Sabarmati hostels.

"Meanwhile, a group came there with muffled faces. They got into a scuffle with students at the T-Point and later barged into the Sabarmati Hostel. They knew which rooms were to be targeted," Tirkey said.

However, the police did not name any group involved in this attack.

Narrating the sequence, Tirkey said a majority of the students wanted to register for the winter semester from January 1 to 5, but alleged that the left-leaning students' bodies were not allowing them to do so.

On January 3, around 1 pm, members belonging to the four left-wing student bodies barged into the server room, tampered with the server and shut it down.

They also pushed the staff of the server room outside, Tirkey said.

"Around three to four hours later, the staff of the varsity restored the server. Thereafter, police registered a complaint for assault, damaging public property and criminal intimidation," he said. An FIR naming Ghosh and others has already been filed by the JNU administration. However, she has not been named as an accused yet.

A day later, some miscreants again entered the server room from its rear side and vandalised the room badly, following which another FIR was registered in that matter, the officer said.

After meeting HRD ministry officials, Jagadesh Kumar said all decisions taken earlier at the Ministry about the hostel fee are being implemented "in totality" and regular classes at the varsity will start from January 13.