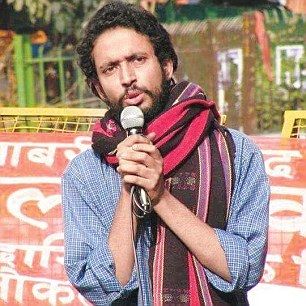 The Jawaharlal Nehru University has suspended a PhD scholar who has been accused of rape by a fellow student, and declared the campus out of bounds for him pending an inquiry, a decision which comes following protests from students and teachers.

A 28-year-old research student has alleged that a fellow student, Anmol Ratan, raped her after offering her a spiked drink in his hostel room in the university on August 20.

Ratan, an activist of the left-affiliated All India Students’ Association, has also been expelled from the student outfit and police have booked him.

While he evaded arrest at first, Ratan subsequently surrendered on August 24 and was sent to 14 days in judicial custody.

‘Considering the seriousness of the case and in conformity with zero tolerance against sexual assault on women, Anmol Ratan is suspended from the university with immediate effect during pendency of the case,’ the suspension order read.

‘The entire JNU campus shall remain out of bounds for Ratan during his suspension. Anyone found giving shelter to Ratan in any hostel residence in the campus shall invite disciplinary action against him or her,’ it added.

The action came after the students and teachers staged protests demanding action against Ratan to ensure safety of women on the campus and send out a strong message of intolerance towards such incidents.

University administration, has also asked the Gender Sensitisation Committee Against Sexual Harassment, to investigate the matter.

The GSCASH is the university's panel to deal with complaints of such nature.

The rape case has become a centre of political agenda setting at JNU campus where student union polls are scheduled to be held in the next fortnight.

Student wings of various political parties are trying to encash the issue ahead of the keenly contested polls.