Several parts of the Kashmir valley were on the boil on Saturday after security forces inflicted heavy damage on militants, killing eight of them, including Sabzar Ahmad Bhat, who had succeeded Hizbul Mujahideen commander Burhan Wani following his killing last July. IMAGE: Army personnel take position in a nearby house during an encounter with terrorists at Soimoh village of Tral in Pulwama. Photograph: S Irfan/PTI Photo

In a major success for the security forces, Bhat was gunned down along with another terrorist, at Soimoh village in Tral of Pulwama district, about 36 kilometre from Srinagar, during a cordon and search operation following specific information about the presence of terrorists there.

The state’s police chief S P Vaid said Bhat was among the two terrorists killed in the encounter.

They were holed up inside a house and opened fire at security personnel as they closed in on their hideout. The two were killed in retaliatory fire.

The army also foiled a major infiltration bid from across the Line of Control in Rampur sector, killing six terrorists.

There was a fierce exchange of fire after the troops noticed some “suspicious movement” in the early hours. On being challenged, the terrorists opened fire, and in the encounter that ensued, six infiltrators were felled, the army said.

A civilian was also reported dead in cross-fire at Soimoh village during the encounter in which Bhat was killed. However, some locals claimed he was killed in firing by the security forces on protesters who took to streets and fought pitched battles with men in uniform after the encounter.

The two factions of separatist conglomerate -- the Hurriyat conference -- have called a two-day shutdown in the valley from Sunday against the “use of force” against protesters in the aftermath of Bhat’s killing. IMAGE: The completely damaged house where two terrorists including a top commander of Hizbul Mujahideen Sabzar Ahmad Bhat were killed in an encounter with security forces at Soimoh village
Photograph: S Irfan/PTI Photo

Mobile internet services have been suspended across the valley to prevent rumour-mongering, officials said.

Violence erupted at more than 50 places in the valley after the news of Bhat’s killing spread like wildfire.

Stone-pelting youth were out on streets in Srinagar, Tral and several big and small towns in the valley, attacking security forces.

According to an official at sub-district hospital in Tral, 19 injured people were admitted there.

While six persons had bullet injuries, 13 others were hit by pellets.

Separatists, while announcing a two-day shutdown, have also called a march to Tral on May 30 to pay tributes to Bhat and seven other terrorists killed on Saturday.

“We condemn the use of brute force against unarmed civilians, injuring hundreds of them and call for a strike on Sunday and Monday,” separatist leaders Syed Ali Shah Geelani, and Mirwaiz Umar Farooq, and Jammu Kashmir Liberation Front chief Yasin Malik, said in a statement in Srinagar.

They asked people in the valley to turn up in large numbers in Tral on Tuesday to pay tributes to the slain terrorists. IMAGE: Army personnel standing outside a house which got completely damaged during the encounter. Photograph: S Irfan/PTI Photo

Mobile internet services were suspended in the valley as a precautionary measure, but BSNL’s broadband service was functioning normally, official said.

The move came hours after the government lifted a month-long ban on 22 social networking websites and apps in the valley region.

Authorities have decided to impose curfew in areas under seven police stations in Srinagar on Sunday to prevent violent protests.

Meanwhile, a spokesman for the Northern Command said in Jammu that “relentless” operations by security forces had resulted in the killing of 10 terrorists in the last 24 hours.

“Relentless operations by security forces have defeated desperate attempts by Pakistan and Pakistan-sponsored agents to spread terror in the state in the run up to the holy month of Ramzan,” the spokesman said.

He said besides the eight killed on Saturday, the army had on Friday shot dead two militants along the LoC in the Uri sector. 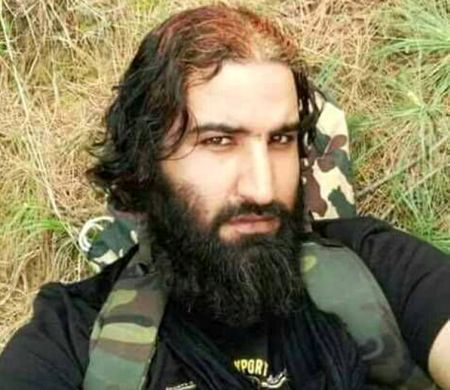 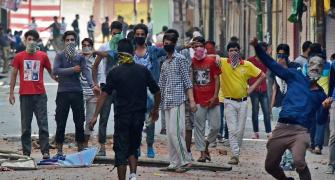 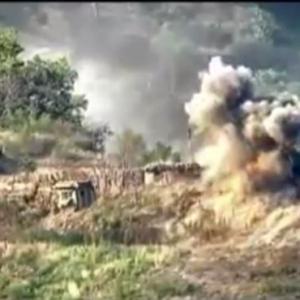