Rajya Sabha proceedings were disrupted on Wednesday as Opposition parties kept up their protests over Pegasus snooping row, farm laws and price rise. 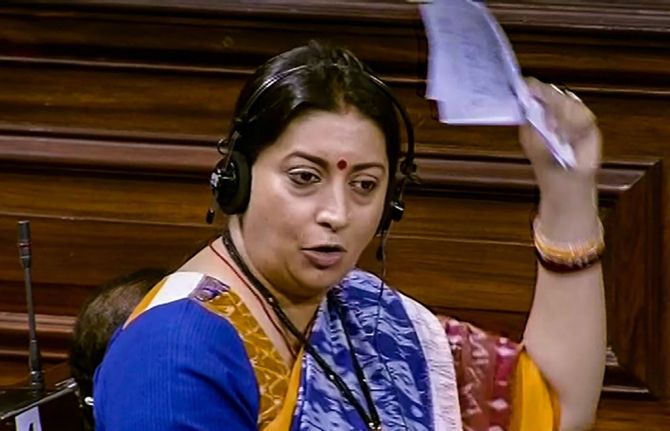 Amid the din, the House approved the Juvenile Justice (Care and Protection of Children) Amendment Bill, 2021.

The Bill is already passed by Lok Sabha.

The Upper House, which has seen continuous protests by the Opposition since the Monsoon session started on July 19 to press for discussions on Peagasus and farm laws, was adjourned thrice before the Chair finally adjourned it for the day.

While moving the bill for consideration in the House, Women and Child Development Minister Smriti Irani said, "Some of the renowned Parliamentarians, who have always prioritised the needs of the vulnerable...however, politics demands that they stand right here in the Well and attract attention towards the issue which they feel fit."

She added that despite this disruption, the House will agree that the children of this country deserve their attention for protection and support.

However, the opposition members did not return to their seats and Raja Sabha witnessed continuous uproar.

They also brought placards. As some of them tried to move into the Well of the House, Naidu ordered that no placards will be displayed.

He instructed the Rajya Sabha Secretariat to publish the name of MPs and the issue they wanted to raise in the Zero hour.

This is to give people an idea of the issue that MPs wanted to raise but could not because of disruption.

"These things should go to the public," he said before adjourning the proceedings till 1200 hours.

When the House resumed at noon, Deputy Chairman Narayana Singh managed to take up all questions listed for the Question Hour amid the din.

While Opposition members were shouting slogans in regional languages standing in the Well, the ministers concerned responded to members' queries amid the commotion.

The Chair requested the protesting members to maintain order in the House, but they did not yield to his request and continued sloganeering.

Since all the listed questions were responded to by the concerned ministers, the Chair adjourned the House till 2 pm.

As soon as the House resumed after lunch, BJP member Bhubaneswar Kalita, who was in the Chair, called Irani to move The Juvenile Justice (Care and Protection of Children) Amendment Bill, 2021 for the consideration of the House.

Even as the minister briefed the House about the Bill, Opposition members continued raising slogans.

"This bill is regarding children, please listen to it," Kalita said.

Opposition members refused to relent despite repeated requests by the Chair to go back to their seats and allow the Bill to be passed as it concerns children.

Kalita then adjourned the House for half an hour till 2.45 pm.

As proceedings again resumed, Kalita told the House that a member, who was unwell due to high blood pressure during the proceeding, was taken to RML hospital and the member is fine now.

Kalita then called the listed members for participating in the debate on the bill.

However, nobody turned up for discussion on the bill.

Some members including TMC's Derek O'Brien demanded a division of votes on the bill.

However, Kalita asked the members to first go back to their seats.

When the members refused to give any heed to the Chair, Kalita asked the Women and Child Development Minister Smriti Irani to move The Juvenile Justice (Care and Protection of Children) Amendment Bill, 2021 for passage.

The minister moved the bill and it was passed amid the din.

Thereafter, Kalita adjourned the House for the day.

When the House met for the day, Naidu mentioned about Dholavira, a Harappan-era city in Gujarat's Rann of Kutch, being added to the list of World Heritage Sites by the United Nations Educational, Scientific and Cultural Organisation (UNESCO).

Thereafter, listed official papers were laid on the table of the House. 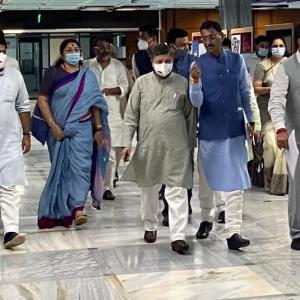 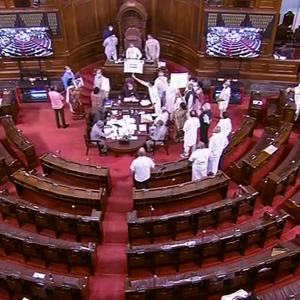