News
Business
Movies
Sports
Cricket
Get Ahead
Money Tips
Shopping
Sign in  |  Create a Rediffmail account
Rediff.com  » News » Jiang Zemin: A Chinese Leader Like None Other

Barring the many young women he had sex with, it is doubtful if anyone saw Mao Zedong smile.

Zhou Enlai, Mao's premier, often sported an enigmatic smile, one that hid his devilish intentions as he did during his visits to India before the 1962 War.

No Chinese Communist leader, past or present, encountered as much adversity and hardship as Deng Xiaoping did, but you wouldn't have known that from his amiable demeanour, even when he was sending soldiers to Tiananmen Square in June 1989.

Hu Jintao was so colourless that when he stopped dyeing his hair -- a crown of black hair is compulsory for China's vain top Communist leadership -- it was the most colourful thing he had ever done.

When he first came to power 10 years ago, Xi Jinping looked like a Chinese version of Winnie The Pooh, but soon A A Milne's memorable character was banned in China because people were comparing Pooh to Xi.

These days, Xi is expressionless, whether he is acknowledging the cheers of his fawning supporters or whether he is ticking off another world leader, as he did at the G20 summit in Bali with Canada's Justin Trudeau. China's supreme leader's face betrays no glimpse of what he is truly thinking.

The Chinese leader who was a complete opposite, an absolute antithesis, of the men who have ruled the People's Republic since that sombre day, October 1, 1949, was Jiang Zemin, who died in Shanghai on Wednesday, aged 96.

Many mocked Jiang as a clown -- some young Chinese in a time when there was a semblance of free speech in China parodied him as a toad -- but to China watchers, the PRC's always animated leader -- general secretary of the Communist party from 1989 to 2002, president from 1993 to 2003 and chairman of China's military commission from 1989 to 2004 -- admirably led his country through the years when it rose to be one of the two most prosperous nations on the planet.

On the way, even though he didn't have a power base in the Communist party to begin with, counting initially on the goodwill of Deng Xiaoping who surprisingly picked him to replace Zhao Ziyang as the party general secretary after the events in Tiananmen Square, he outlived his rivals and established himself as a dominant force in Chinese politics, only ebbing in influence after Xi Jinping embossed his authority over the party, government and country.

When Jiang Zemin traveled, as you can see in the photographs here, a Kodak Moment was never far away. IMAGE: Then Chinese president Jiang Zemin at the Taj Mahal, November 30, 1996.
Jiang was in India on a three-day visit aimed at improving ties between the world's most populous nations. Photograph: Reuters 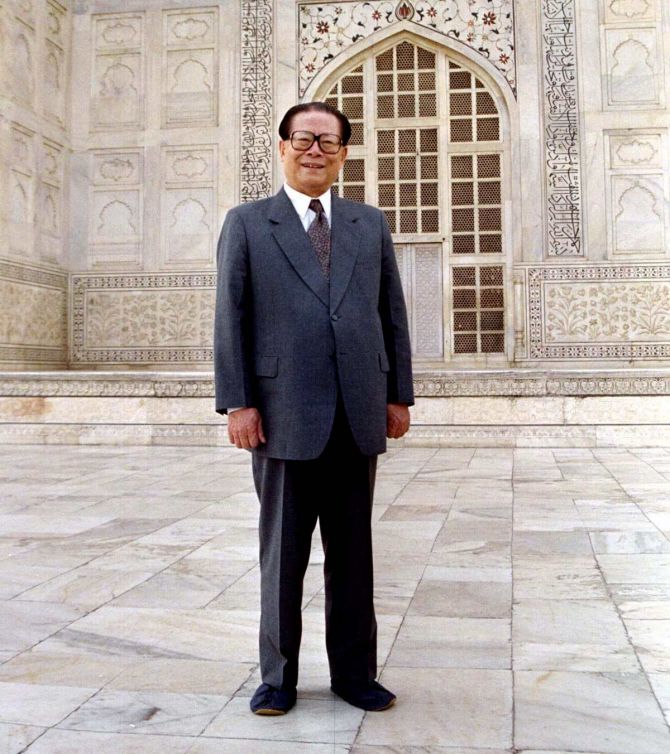 IMAGE: Jiang in the courtyard of the Taj. Photograph: Reuters 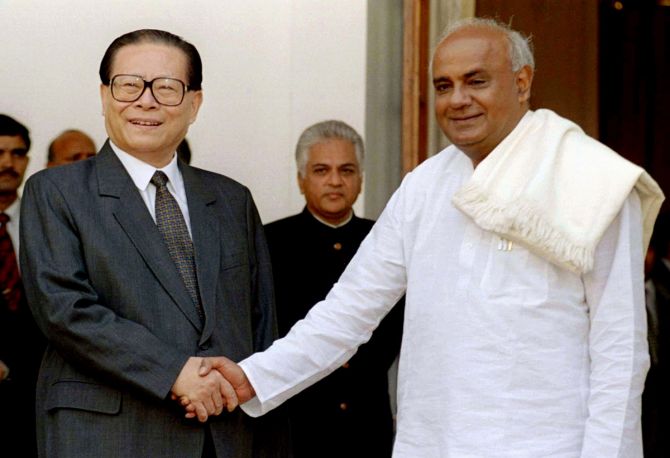 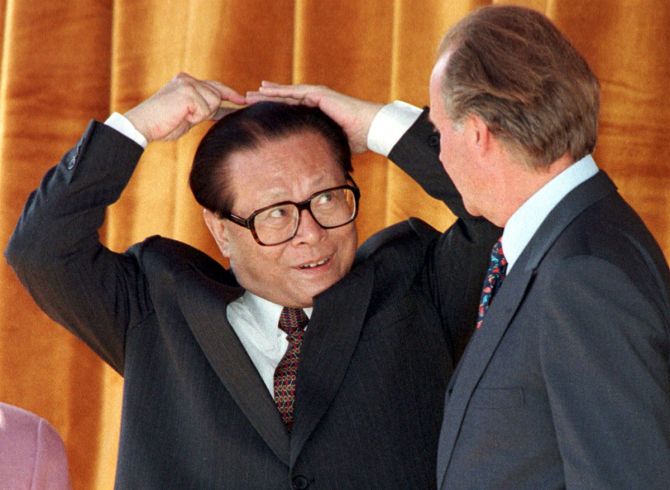 IMAGE: Jiang combs his hair next to then Spanish king Juan Carlos during traditional welcome ceremonies at the El Pardo palace in Madrid, June 24, 1996. Photograph: Reuters 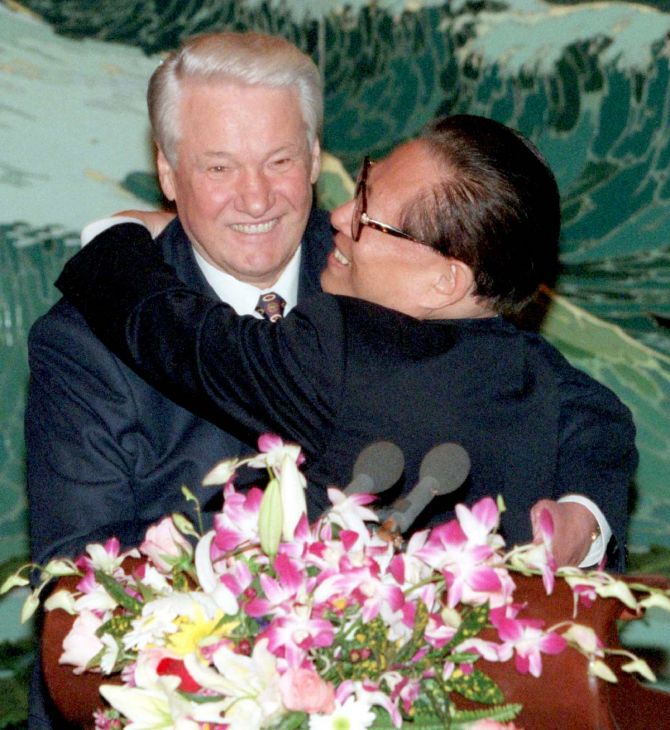 IMAGE: Then Russian president Boris Yeltsin receives a hug from Jiang at a news conference in Beijing, November 10, 1997.
Earlier, they had signed an accord designed to settle arguments on the last fragments of their disputed borders. Photograph: Reuters 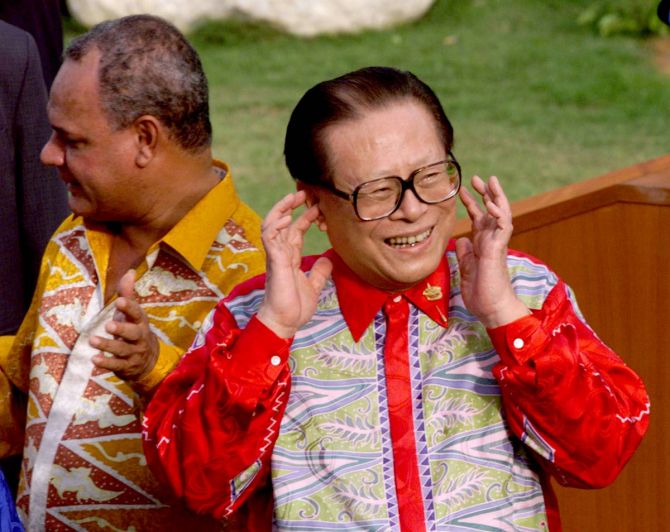 IMAGE: Jiang puts his finger in his ear in response to yelling from the media after the Asia Pacific Economic Cooperation (APEC) leaders summit at Cyberview Lodge, November 18, 1998. Photograph: Reuters 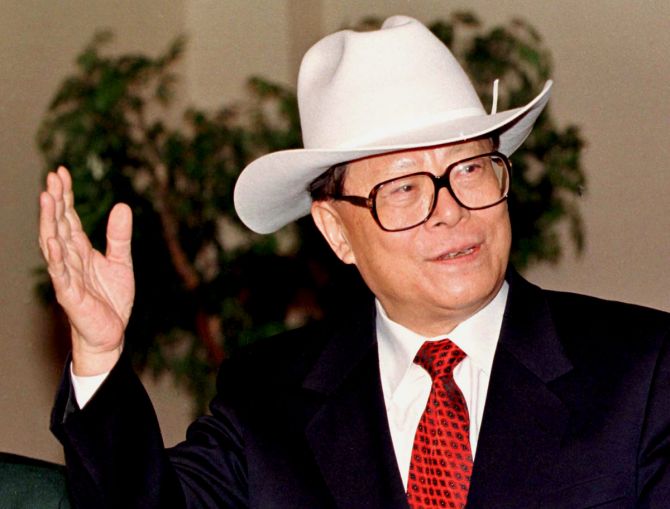 IMAGE: Jiang waves to then Calgary mayor Al Duerr (out of frame) who gave the Chinese leader a white Stetson hat, November 26, 1997.
The white cowboy hat is presented to most heads of State who visit the Canadian city which is famous for its Calgary Stampede. Photograph: Reuters 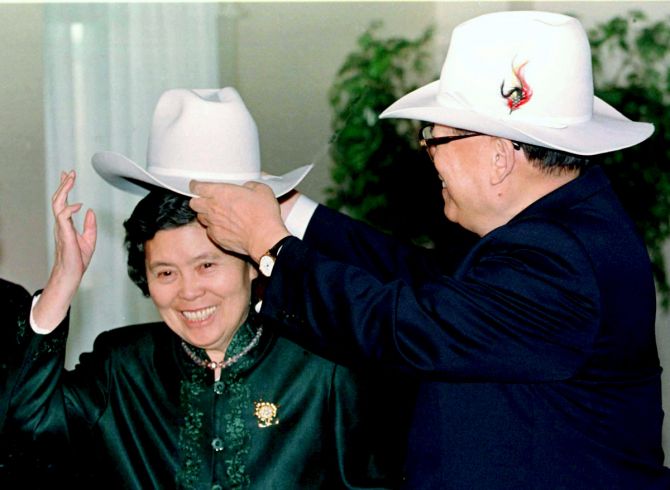 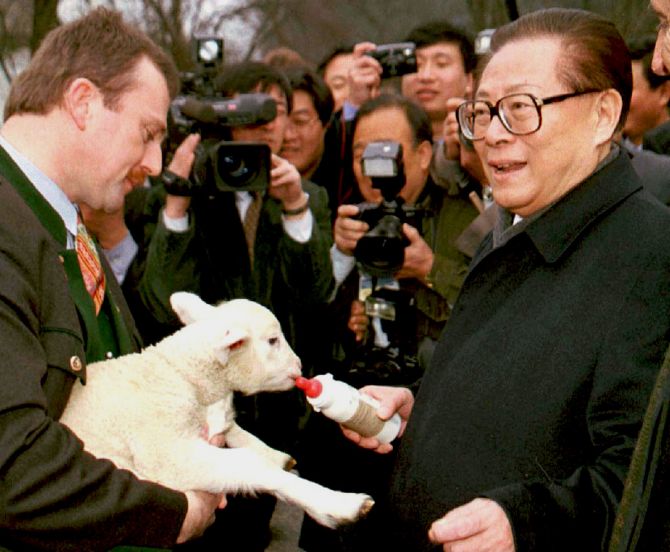 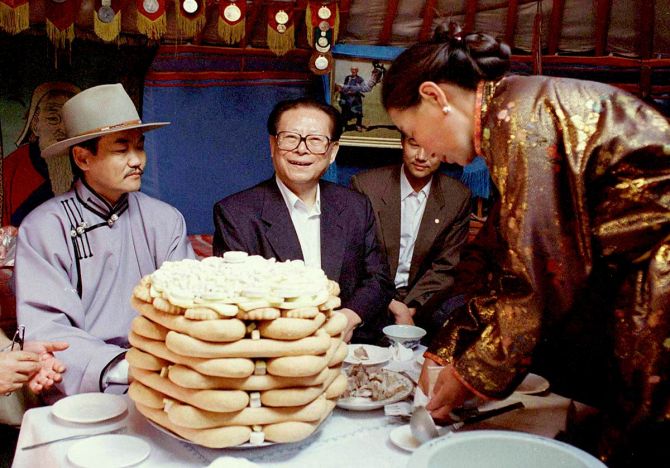 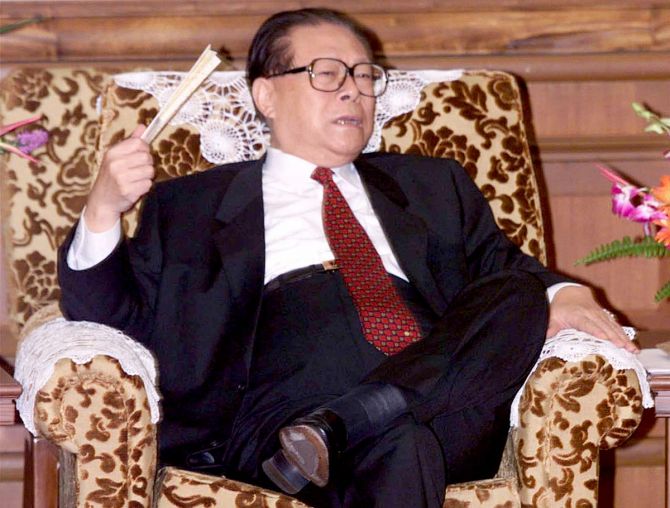 IMAGE: Jiang uses a paper fan to cool himself as he waits for then New Zealand prime minister Jenny Shipley at the Diaoyutai state guest house in Beijing, July 19, 1999. Photograph: Reuters 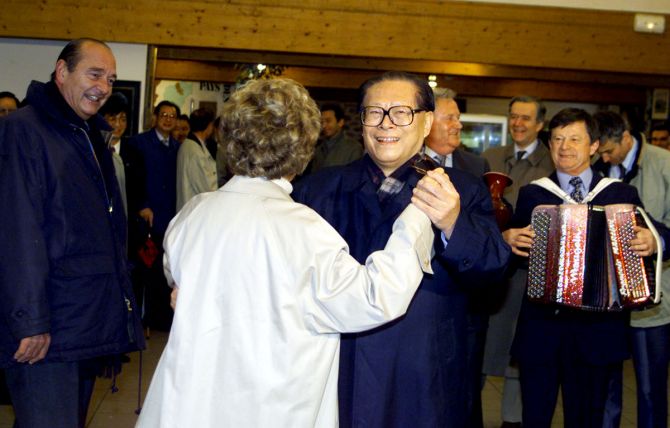 IMAGE: Jiang yawns during a speech by former Chinese prime minister Li Peng at the Great Hall of the People in Beijing, March 9, 2002. Photograph: Reuters 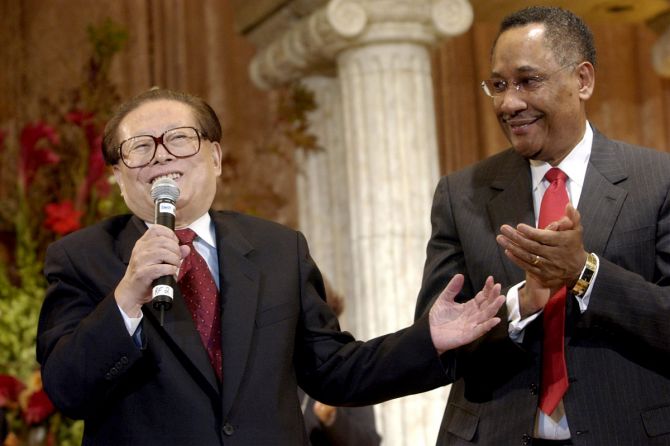 IMAGE: Jiang, who was known to sing English songs at dinners with visiting American leaders, with then Houston mayor Lee Brown at a banquet hosted in Houston in his honour, October 23, 2002. Photograph: Pool-David J. Phillip/Reuters 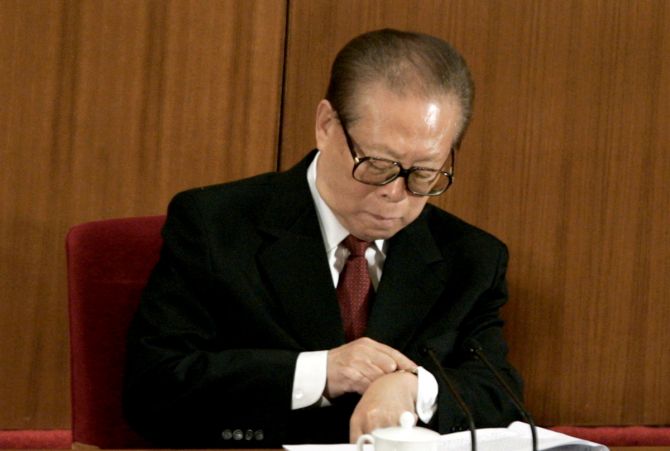 IMAGE: Jiang checks his watch as then Chinese president Hu Jintao delivers a speech at a reception marking the 80th anniversary of the founding of the People's Liberation Army at the Great Hall of the People in Beijing, August 1, 2007. Photograph: Jason Lee/Reuters 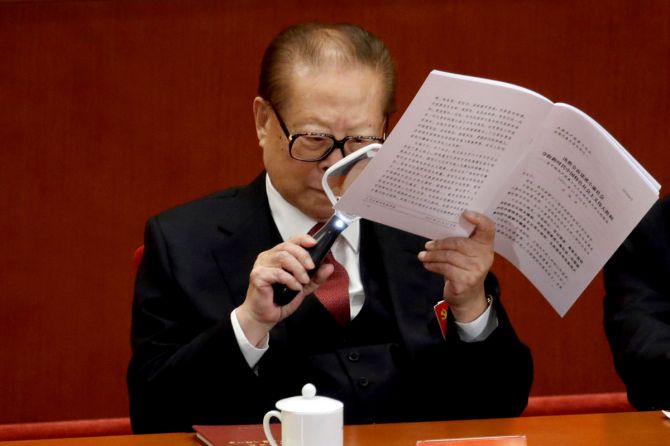 IMAGE: Jiang uses a magnifying lens as he reads Chinese President Xi Jinping's report at the opening of the 19th national congress of the Communist party of China at the Great Hall of the People in Beijing, October 18, 2017. Photograph: Jason Lee/Reuters 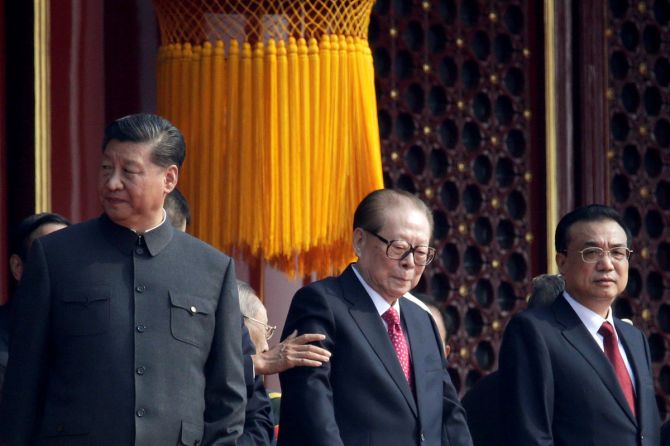 IMAGE: Xi with Jiang and Premier Li Keqiang at Tiananmen Gate before the military parade marking the 70th founding anniversary of the People's Republic of China on its National Day in Beijing, October 1, 2019. Photograph: Jason Lee/Reuters 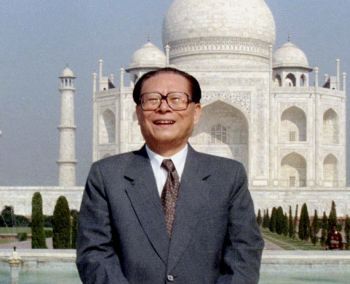 REDIFF NEWS
Print this article
Jiang In India: 'India ready to work for a fair and reasonable solution to border dispute with China'
Jiang In India: China, India sign no aggression treaty
Jiang In India: The text of the border agreement signed between China and India on Friday

Jiang In India: China will not supply nuclear weapons to any South Asian country