Although conventional political wisdom would decree that the construction of a 'magnificent' Ram temple at his 'birth-place' would bring the BJP a big yield of votes in the prospective elections, its leaders know by now that the mandir must not exist in isolation in its game plan, reports Radhika Ramaseshan. 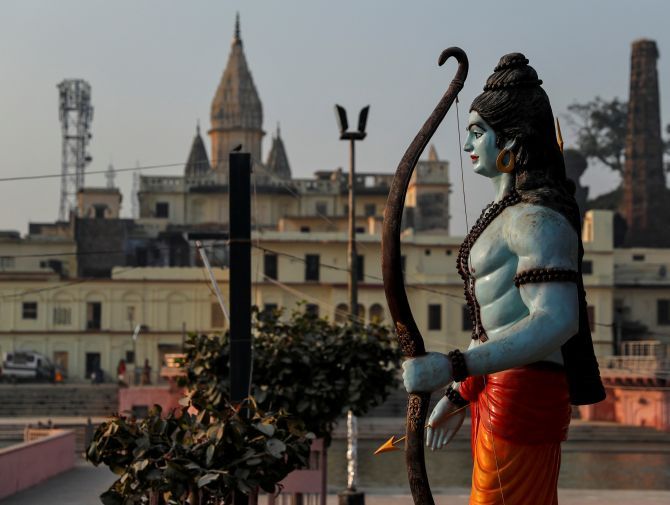 Ayodhya and the Ram temple are strange phenomena in electoral terms. After scaling an apogee of success on the temple agitation in the 1989 and 1991 general elections, the Bharatiya Janata Party -- the main receptacle of votes for a temple on the site of the Babri mosque -- never climbed the same heights.

Yet, by positioning the temple at the core of its political agenda, the BJP landed in a piquant situation: Ram was there and not there for people.

The temple became a weight it found hard to lug and impossible to discard.

Therefore, although conventional political wisdom would decree that the construction of a 'magnificent' Ram temple at his 'birth-place' would bring the BJP a big yield of votes in the prospective elections, its leaders know by now that the mandir must not exist in isolation in its game plan.

It must be Ram plus other issues that do not necessarily hinge on faith.

The tide turned in December 1993, in Uttar Pradesh, the hotbed of the temple-mosque agitation. The assembly election that year was construed as a referendum on the mosque's demolition, which happened a year before.

The BJP's campaign was underpinned on projecting Kalyan Singh, who was chief minister when the deed was done, and a slogan that said 'jo kaha, so kiya (what was said was done)'.

Things went out of kilter, when the Other Backward Classes (OBCs) in the BJP, emboldened by Singh's leadership (he is from the Lodh-Rajput backward caste), allegedly demanded a disproportionate share of the tickets and angered the upper castes, who believed that they carried aloft the temple flag by birthright.

Meanwhile, large sections of the OBCs, Dalits, and Muslims banded together in the Samajwadi Party-Bahujan Samaj Party alliance and beat the BJP by a whisker to form a government. Caste trumped faith.

With each passing election, the temple became less significant.

In the Lok Sabha elections held since 1957, the BJP (and the erstwhile Jan Sangh) won Faizabad (Ayodhya is part of it) five times but not always in Ram's name.

It claimed the Ayodhya assembly seat quite a few times but the irony underlying its victory was apparent when, in the 2017 assembly election, the winner, Ved Prakash Gupta, was a BSP defector who won on the back of PM Narendra Modi's 'charisma'.

That's why when Yogi Adityanath, the UP chief minister who has an abiding link with the Ram temple 'movement' via his spiritual guru, the late Mahant Avaidyanath, travelled to Ayodhya on October 18, 2017, to preside over a spectacle of Diwali festivity, he cloaked the occasion’s religious import in the notion of vikas (development). He didn't speak overmuch on the temple.

When the BJP lost the Lok Sabha election in 2009, it was the humble Kameshwar Chaupal who said a thing or two to the party's brass.

Chaupal is a Dalit from Bihar's Supaul and was sought by Ashok Singhal, the late patriarch of the Vishwa Hindu Parishad, to lay the foundation stone during the shilanyas of 1989 in Ayodhya.

The idea was to showcase Hindutva as an inclusive, all-encompassing idea that became important to the Rashtriya Swayamsevak Sangh after the mass conversion of Hindus to Islam at Meenakshipuram (Tamil Nadu) in 1981.

The far-sighted thinkers and strategists of the Sangh 'parivar' know that while the temple plank could likely gain traction after the court verdict, it was unfeasible to hang the BJP's future on its construction.

From the Centre/BJP's standpoint, the court’s direction to form a trust that will oversee the temple's construction makes eminent sense.

There's a precedent for the order. In 1947, Sardar Vallabhbhai Patel and K M Munshi, who were senior ministers in Jawaharlal Nehru's cabinet, asked to reconstruct the Somnath temple in Gujarat, which Munshi elevated into the consciousness of India as a symbol of 'Islamic iconoclasm' and 'intolerance' (it was first ravaged in 1026 by Mahmud of Ghazni).

The government of the day became the custodian of the trust and crowd-sourced fund collection.

Had the Ram temple's construction been left to the VHP-sponsored Ramjanbhoomi Nyas (trust), it could have triggered ownership and control conflicts between the RSS/VHP/BJP and an impetuous Hindu clergy, which arrogates proprietary rights to itself.

The Jharkhand election will be the first test of the impact of Ayodhya on the electorate.

The BJP is up against an alliance of the Jharkhand Mukti Morcha, the Congress, and the Rashtriya Janata Dal, the silver lining being that the Jharkhand Vikas Morcha (Prajatantrik) is not part of the Opposition’s coalition and could potentially split the JMM's tribal vote.

On the BJP's drawing board are the usual caste permutations and combinations and local issues because after the less-than-par showing in Haryana and Maharashtra, it won't take chances.

The much-touted reading down of Article 370 and the rhetoric over identifying infiltrators were not as electorally effective as the BJP had calculated. Why take a risk by foregrounding Ayodhya alone? 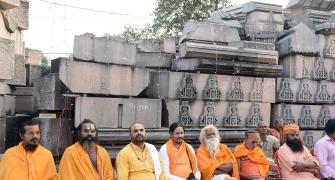