Samajwadi Party Member of Parliament Jaya Prada on Sunday came out in defence of her mentor Amar Singh and appealed to the party leadership to prevent him from being 'maligned' by his opponents.

"Despite his poor health, Amar Singh has worked selflessly for the party and even campaigned for SP candidates during the Uttar Pradesh assembly elections and last year's Lok Sabha polls," said the MP from Rampur, who was backed by Singh after former SP leader Azam Khan strongly opposed her candidature from the seat during the general elections last year.

"Who has given Mohan Singh (newly-elected SP spokesman and general secretary) the right to seek his resignation? How can the statements he has been making against Amar Singh be described as the party's viewpoint," the film actress-turned- politician asked.

Jaya Prada warned that if Mohan Singh continued to attack Amar Singh, "then this will not be tolerated... How can a spokesman use his post to say such things about a senior leader?"

"I respect party chief Mulayam Singh Yadav. He is like a father figure to all of us in SP and though I am too small a leader to speak to him directly on this matter, I urge him to intervene and stop such attacks on Amar Singh in the party," she said.

Asked whether she will choose Amar or Mulayam, she said, "Amar Singh supported me when some party leaders were attacking me during the Lok Sabha polls. Now when he is in trouble, I am supporting him, but that does not mean that we will leave the party. We are not against Mulayam Singh."

Reacting to Jaya's comments, party general secretary Ram Asresy Kushwaha said that like Singh, Jaya Prada too has become history for the SP.

"On January 27, I had said that Amar Singh had become history for the SP, now Jaya Prada too has joined him," Kushwaha said.

Terming such a statement as gross indiscipline, the SP leader said "Till now we were hearing Amar's statement, now Jaya Prada has joined the chorus," he said, adding that there was no point in wasting time on these issues.

The SP general secretary said he would suggest action against leaders indulging in indiscipline to the party high command. "Any decision will be taken by the party supremo Mulayam Singh Yadav," he added.

Kushwaha said that it was Mulayam's ideology that the party should not dwell in the past but look forward. "We do not believe in dragging on an issue, instead we add a page in the history book and forget it," he said.

"Netaji (Mulayam) made him what he is today. Now Amar Singh is full of repentance as he will not get the honour back again," the SP general secretary said.

Kushwaha claimed that leaders and workers of various political parties were making a beeline to join the SP.

"The SP will emerge as the number one party in the forthcoming state assembly elections," he said. 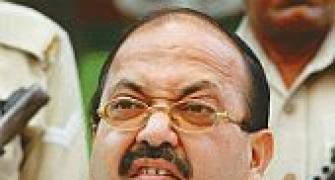