A special court in Jammu on Wednesday asked the Central Bureau of Investigation to physically produce before it JKLF chief Yasin Malik, who is lodged in Delhi's Tihar Jail, on October 20 in connection with the 1989 kidnapping of Rubaiya Sayeed, daughter of then Union home minister Mufti Mohammad Sayeed. 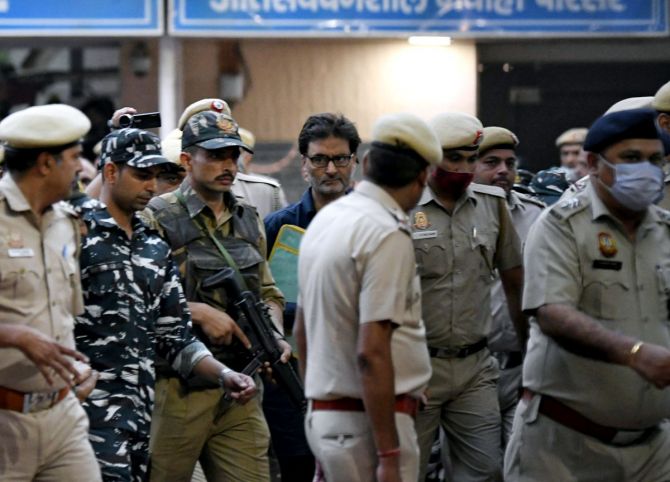 The special court issued the production warrant to the CBI for cross-examining witnesses in the case.

Monika Kohli, standing counsel for the CBI, said the court issued the production warrant despite an objection by the agency on the ground that there are specific directions of the high court that all accused be presented through video conference.

Rubaiya Sayeed was present in the court during the hearing, and told it that she never looked back to the horrific incident as she tried to live a normal life.

JKLF chief Malik, who is one of the accused in the case, appeared before the court from the Tihar jail through video conferencing, once again insisting for his physical appearance to cross-examine the witness.

"The court has passed an order in the open court to produce him (Malik) physically on the next date of hearing... The production warrant has been issued accordingly," Kohli said, adding that the Tihar Jail has direction that he should be produced before the court.

On reports that Rubaiya told the court that she did not recall any of the accused present in the court or having identified any of them before the investigation agency, the CBI counsel said, "She had identified Malik again on the photographs during the cross-examination. A few questions were asked to her and she has been able to answer those questions accordingly."

Last time, she said, Rubaiya had identified five accused including Malik and "the question of identifying the accused again today was never there. You can verify from the court records whether she had backtracked or what she had done."

Kohli said Rubaiya will be present herself in the court on October 20 because Malik has to cross-examine her.

When media-persons asked Kohli if she thought that a criminal "dictating terms to the court" on his physical appearance is "blackmailing", she said, "I do not take it like that."

"Everybody has a right in criminal jurisprudence or law. He has put forth his position before the court and said the cross-examination of the witness is not possible through video conference," she said.

Malik has been insisting on the physical appearance to cross-examine the witness and had turned down the court's offer of legal aid or amicus in the past.

Kohli said, "We have objected to the situation because video conferences are there and the high court had passed a specific direction that all accused be present through virtual mode only... The court has passed an order in the open court. We have to look at the detailed order."

Rubaiya was abducted near Lal Ded Hospital on December 8, 1989, and freed from captivity five days later on December 13 after the then V P Singh government, supported by the Bharatiya Janata Party at the Centre, released the five terrorists in exchange.

Rubaiya, who now lives in Tamil Nadu, is listed as a prosecution witness by the CBI, which took over investigations into the case in early 1990.

On July 15 this year, Rubaiya identified Malik and three others as the ones who took her captive.

The 56-year-old Malik is at present lodged in the high-security Tihar Jail after he was sentenced by a special NIA court in Delhi in May. He was arrested in early 2019 in connection with the 2017 terror-funding case registered by the National Investigation Agency.

The CBI had framed charges against 10 people, including Malik, in the case in January last year.

Malik observed a 10-day hunger strike from July 22 after the Centre did not respond to his plea for allowing him to physically appear in the Jammu court hearing the abduction case. 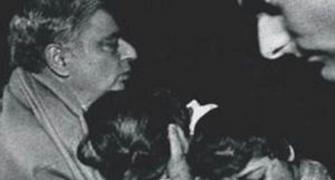 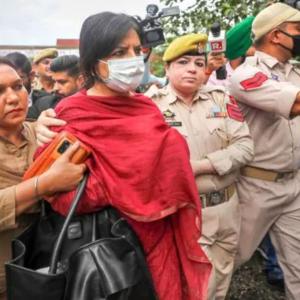