While President Pranab Mukherjee has received number of honorary degrees, it is first such honour accorded to him by a country. 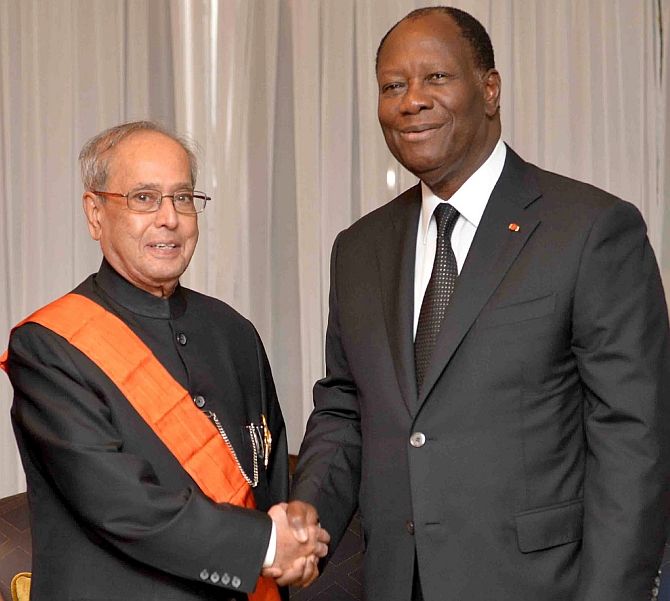 President Pranab Mukherjee has been accorded the highest honour of Cote D'Ivoirie by its President Alassane Ouattara on his maiden visit to the country.

After an elaborate reception accorded at the airport in capital Abidjan, Mukherjee attended a banquet on Tuesday evening hosted by Ouattara where he was accorded with Grand Cross National Order of the Republic of Cote D'Ivoirie in a simple ceremony in the President's Palace.

It is the first such honour accorded to Mukherjee, Press Secretary to the President Venu Rajamony said.

He said while Mukherjee has received number of honorary degrees, it is first such honour accorded to him by a country.

In his speech at the banquet, Mukherjee who is on the second leg of his three-nation visit to Africa, said it is rightly believed that the mutual goodwill between India and Cote D'Ivoirie is inversely proportional to the geographical distance separating the two countries, longstanding friendship and fruitful co-operation has made it irrelevant.

"I feel greatly honoured, Excellency, by your gesture of conferring on me the National Order of the Republic of Cote D'Ivoirie. I consider it to be emblematic of the long standing mutual friendship between the peoples of our two countries," he said.

Calling for UN reforms, Mukherjee said both countries share many commonalities as both are active participants in regional and international fora and have worked together in close cooperation on matters of shared interest and concern.

"We both recognise the imperatives of strengthening the UN system and other international organisations. We would like to see them reformed s that they remain relevant and effective in addressing the challenges that confront the world today. In this context, India stands ready to shoulder greater responsibilities in the specialised organs of the United Nations, particularly the UN Security Council," he said.

He also underlined "common concerns" of both countries in the fight against international terrorism.

"We have been co-ordinating closely in regional and multilateral fora on this and other key issues including disarmament, climate change and sustainable development," he said.

Mukherjee said India's commitment continued in the form of South-South Cooperation through developmental assistance and sharing resources for the development of her brother nations in Africa.

The President said India's public and private sector are keen to join Cote D'Ivoirie in setting up agro-based industries because of its fertile soil and agricultural and mineral resources.

"We would be happy to join your government in developing the infrastructure that you require in the different sectors of your growing economy. We have much to offer. At this time -- when both our nations are growing at a rate of 7-9 per cent, there are infinite opportunities that must be seized," Mukherjee said.

He appreciated the naming of an information technology park in Abidjan after Mahatma Gandhi calling him "a true son of India as well as Africa".

"During his initial struggles in South Africa, he espoused the principles of Ahimsa (Non-Violence) and Satyagraha as tools for emancipation of the people from the exploitative and oppressive colonial rule.

These principles later inspired independent India's efforts in support of the decolonisation of Africa in the 1950s and 1960s. It was also at the core of India's solidarity in the anti-apartheid movement," he said.

Mukherjee said India will remain a steadfast partner in assisting Cote D'Ivoirie in its economic development and growth. He said trade between the two nations is expected to touch $1 billion in the next few years.

"Given the relative size of our economies and our wide convergences in several sectors of common interests, we both agree that our trade and investment and economic co-operation does, indeed have a greater potential that is waiting to be fully realised," he said. 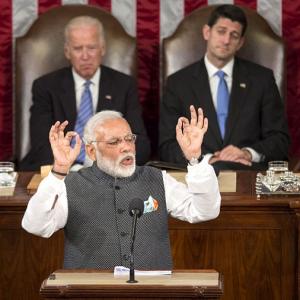