It's payback time for Modi in TN

With the presidential elections over, the time has come for Prime Minister Modi to show Tamil Nadu that the state's interests are safe under him, says R Rajagopalan. 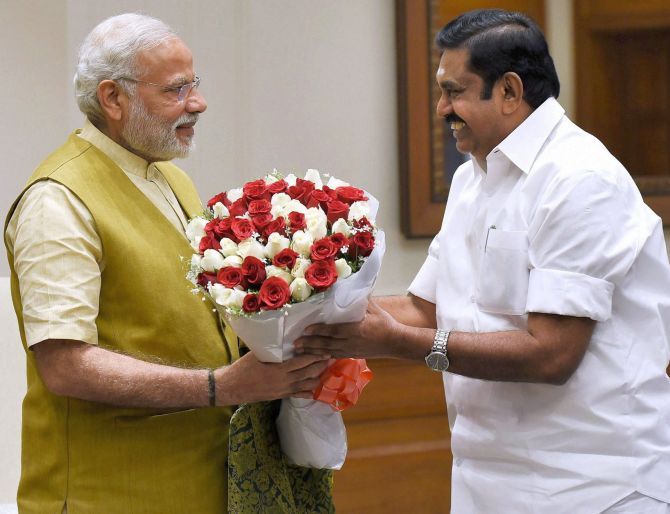 Tamil Nadu politics has become very difficult to analyse these days, as it is fast changing not only day by day, but hour by hour.

For the first time in the history of the state, the ruling party has split into three factions -- one headed by Chief Minister Edappadi K Palaniswami, one by former CM O Panneerselvam and a third led by T T V Dinakaran.

All these three groupings are formidable forces.

Interestingly, each is spying on the other two. Therefore, politicking has become more of a business than to run the government and administration or to concentrate on strengthening the All India Anna Dravida Munnetra Kazhagam.

Whether these three factions are able to keep their vote bank intact should be left on an election. But right now, all three have prostrated before Prime Minister Narendra Modi.

After party supremo Jayalalithaa's demise, leaders of the three factions have made frequent visits to New Delhi, to be seen with Modi.

Officially, the answer could be the presidential and vice-presidential elections, in which they were supporting the National Democratic Alliance candidates.

Since the elections are now over, Modi will be obliged to return the favour to Tamil Nadu.

But, let’s leave these probabilities here and focus on the AIADMK factions.

Let's first talk about the strength of each faction.

Chief Minister Palaniswami heads the state government and controls over 95-100 MLAs. They are with him simply because he wields power.

Panneerselvam, on the other hand -- due to his simplicity and for raising his voice against Sasikala -- has much of the AIADMK cadre and district units with him.

Dinakaran, meanwhile, as the deputy general secretary of the party, controls party funds that run into crores.

So, EPS has power, OPS controls the cadre, and Dinakaran is sitting over huge party funds.

The late chief minister Jayalalithaa dented Dravidian culture. She not only ensured that her partymen prostrate before her, but also encouraged the worship of deities in temples. She could do this because of her strong leadership.

She was the only leader who could win votes for AIADMK’s alliance partners.

The Dravida Munnetra Kazhagam, which was once a strong political outfit and a formidable opposition, is losing its strength after party patriarch M Karunanidhi's hospitalisation and a feud within the family.

That is why M K Stalin and the DMK were unsuccessful in rising to the occasion and dislodging the weakest AIADMK government so far.

Despite having 90 MLAs in the state assembly, the DMK failed in politicking. Public sympathy is not with Karunanidhi or the DMK due to various corruption charges against the party.

The AIADMK might have split in three camps, but so far, after the demise of Jayalalithaa, not one of the senior AIADMK leaders has crossed over to the DMK.

Though the AIADMK leaders fight among themselves, they are not ready to give a leverage to Stalin, because the party was born on an anti-Karunanidhi sentiment.

Let’s talk about other political parties who are supposed to be strong at the district-level.

Pattali Makkal Katchi, a Vanniyar caste outfit, is powerful in six districts. But Jayalalithaa, in the 2016 assembly polls, trounced it to zero.

Similarly, Captain Vijayakant's Desiya Murpokku Dravida Kazhagam was also crushed by the Jayalalithaa wave that swept the state in 2016.

Now these two parties are finding it difficult to hold their ground.

The situation of the two national parties -- the Bharatiya Janata Party and the Congress -- is also not very good.

These two parties have no roots in the state. Nor do they have an organisation at the district-level. The result is the BJP is not in a position to capitalise on the Modi wave.

Can AIADMK rely on Modi?

The combination of Modi and Jayalalithaa has always been a forceful one.

Jayalalithaa was one of the first non-BJP leaders to support Modi in the aftermath of the 2002 Godhra train-burning incident and the subsequent riots.

Modi hasn’t forgotten this. That’s why he not only attended Jayalalithaa’s funeral but was also present at her swearing-in ceremonies in the past.

This combination worked very well for Tamil Nadu. They had a common enemy in the Congress and its chief Sonia Gandhi.

Modi as prime minister supported Jallikattu and a special ordinance was promulgated to facilitate the bull-taming sport.

Modi also tried to resolve the NEET examination controversy when thousands of students were outraged over a technical and legal hitch.

As things stand, with the presidential elections over, the time has come for him to show Tamil Nadu that the state's interests are safe under him. 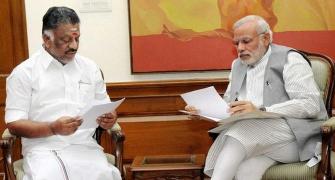 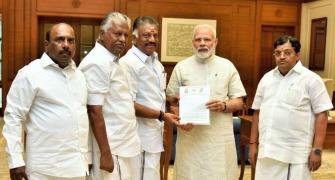 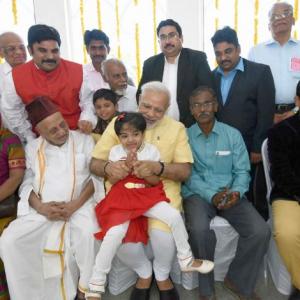