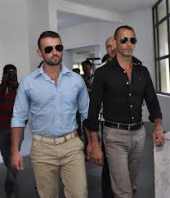 However, Dr Singh, who received a call from Monti, recalled the clarification given by the Ministry of External Affairs to Italy prior to the return of the marines to India last month.  The telephone call by Italian PM came amid concerns over the slapping of murder charges against the marines, which entails death penalty.

"Prime Minister Singh received a telephone call from the Italian prime minister. During the course of the call, the issue of Italian marines in India was discussed," official sources said.

The sources said Dr Singh appreciated the Italian government's decision to send the marines back to India in line with the commitments that had been made before the Supreme Court and in order to enable the judicial process to move forward.

Dr Singh also recalled the recent conversation between the External Affairs Minister Salman Khurshid and the Deputy Foreign Minister of Italy, Staffan de Mistura and mentioned that the process of setting up a special court is at a fairly advanced stage and the attorney general would provide further details in this regard during the next hearing in the Supreme Court on April 16.

"Prime Minister Singh also said that in view of pending investigations, it would be premature to take a view on specific aspects. However, he recalled the clarifications provided by the MEA to Italy in its earlier communication prior to the return of the marines," sources said.

Monti thanked Dr Singh for the update. He also conveyed his condolences on the "sad" incident in South Sudan, which led to the death of 5 Indian Peacekeepers and injuries to four others.

The charge entails maximum punishment of death penalty. However, Khurshid, in Parliament last month, had ruled out that the case will attract death penalty.

The two marines, Massimiliano Latore and Salvatore Girone, were on board an Italian vessel 'Enrica Lexie' when they allegedly shot dead two Indian fishermen off the Kerala coast on February 15, last year. The home ministry had handed over the case to  NIA, which has submitted an FIR before the special NIA court booking the marines under sections 302 (murder), 307 (attempt to murder), 427 (mischief) along with section 34 (Common intent) of the IPC.

The NIA also booked them under the Suppression of Unlawful Acts Against Safety of Maritime Navigation and Fixed Platforms on Continental Shelf Act, 2002. The law deals with cargo ships and maritime navigational facilities whose personnel indulge in offences committed at sea. The maximum penalty in this section is death in case the action by those onboard has resulted in killing.

Marines case: India to honour assurance given to Italy 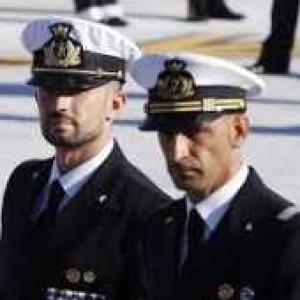