In comments that can stoke a fresh controversy, Union minister Beni Prasad Verma on Monday said the next Lok Sabha elections will see a direct fight between Rahul Gandhi and Narendra Modi.

A day after he said that the Samajwadi Party chief Mulayam Singh Yadav was "dreaming" of becoming prime minister, Verma on Monday said that parties like Samajwadi Party do not have all India presence and hence cannot form a government at the Centre.

"The government (at the Centre) will either be of Congress or Modi. Why they (SP) are misleading. Does the public not understand all this.... If Rahul Gandhi is our candidate, then the election in the 2014 will be Rahul Gandhi versus Gujrat Chief Minister Narendra Modi. No other party is in between," Verma said.

Verma also hailed the prime minister as a "frank" person saying the country will never get such a "gentle" person as PM. "The whole world considers him an honest persons except the Opposition parties in our country," he said.

Verma said that he always wanted Rahul Gandhi to become the prime minister but the decision on when has to be taken by the Congress president and the PM.

"Who fights for Muslims? It is Congress, which fights for them at the national level. Small insignificant parties have misled them. Congress is concerned about Muslims, Hindus, Christians and all and on the other hand here are the traders of votes, who are concerned only about their votes," he said. 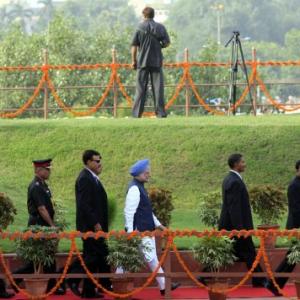