India is the fourth country to demonstrate the flight testing of Scramjet Engine after the United States, Russia and European Space Agency. 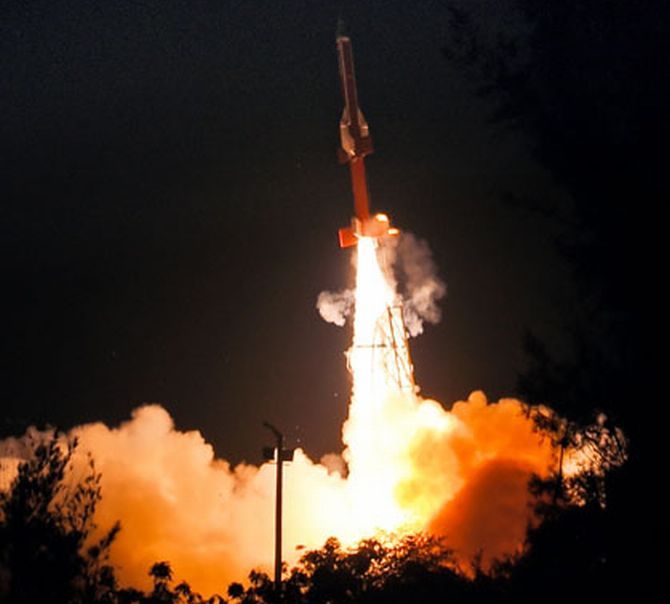 The first experimental mission of Scramjet Engine was successfully conducted from the Satish Dhawan Space Centre at Sriharikota in Andhra Pradesh at 6 am, the ISRO said.

It described the mission as a ‘modest’ yet important milestone in its bid to design and develop advanced air breathing engines, including ones for its future space transport system.

India is the fourth country to demonstrate the flight testing of Scramjet Engine after the United States, Russia and European Space Agency.

After a smooth countdown of 12 hours, the solid rocket booster Advanced Technology Vehicle carrying the Scramjet Engines lifted off at 6 am and ending a 300-seconds flight, touched down in the Bay of Bengal, about 320 km from Sriharikota, the city-headquartered ISRO said.

The important flight events -- burn out of booster rocket stage, ignition of second stage solid rocket, functioning of Scramjet engines for 5 seconds followed by burn out of the second stage -- took place exactly as planned, the ISRO said.

The vehicle was successfully tracked during its flight from the ground stations at Sriharikota. 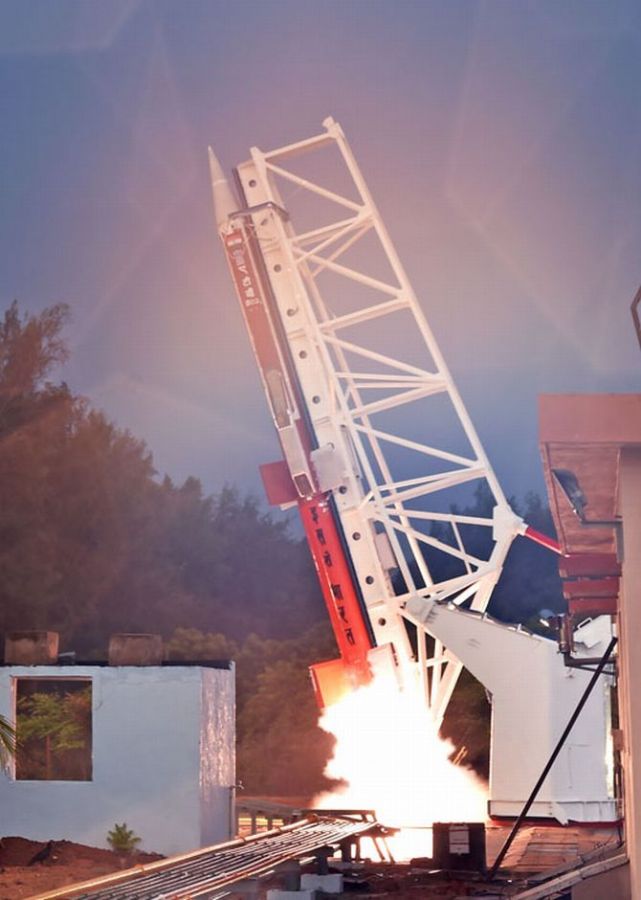 The ISRO said it was the maiden ‘short duration experimental test’ of Scramjet engine with a hypersonic flight at Mach 6, and the ATV, an advanced sounding rocket carrying the engines, weighed 3,277 kg at lift-off.

It said Scramjet engine designed by the ISRO uses Hydrogen as fuel and the Oxygen from the atmospheric air as the oxidiser.

Usually, rocket engines carry both fuel and oxidiser on board for combustion, but these newly developed engines with air-breathing propulsion system will use oxygen from the atmosphere thereby reducing the lift-off mass of the vehicle. It will also help in bring down launch costs substantially.

ATV is a two-stage spin stabilised launcher with identical solid motors (based on Rohini RH560 sounding rocket) as the first as well as the second stage (booster and sustainer), the ISRO said.

President Pranb Mukherjee, who is in Bengaluru, congratulated the ISRO for the successful test.

‘Hearty congratulations ISRO on successful test of futuristic scramjet rocket engine, India is proud of you,’ he said in a tweet.

Addressing a press conference in Chennai later, Vikram Sarabhai Space Centre Director K Sivan said two sounding rockets were used -- one was tagged with another -- for the technology demonstration.

While one went up to seven kilometres and descended, the other which had two scramjet engines strapped onto it went further, up to 20 kilometres.

The technology was indigenous, in tune with ‘Make in India theme of the Central government,’ he said.

While the duration of scramjet engine functioning was five seconds, at the beginning of the five second duration, fuel was injected and then engine ignited automatically.

“The injection of fuel lasted for seven seconds, the burning happened, flame was sustained and the result showed that what we wanted has happened.”

Scramjet engines had auto-ignition capability, he said, adding ignition happens when hot air gets into contact with hydrogen. “This is one specialty of today's demonstration.”

Explaining some of the highly critical aspects of the experimental mission, he said air gets into the combustion chamber at supersonic speed.

At this speed, the air gets inside the chamber continuously and ignition needs to happen at such a juncture and flame should be sustained.

“It is similar to lighting a match during a cyclone,” he said.

“Only when the flame is sustained combustion will happen,” he said, adding no other country (which has it now) would come forward to share such a complicated technology with others.

Stating that auto-ignition was one aspect of technology demonstration, he said the result shows that ‘whatever we had planned was achieved, meaning we have now the (air breathing propulsion) technology’.

Also the required thrust level was achieved and on Sunday ‘ISRO and India has achieved a very critical, complex technology useful for future space transportation systems either for launch vehicles or for aerospace plane’.

“Now using this technology, we need to design the actual vehicle. That is the task we have cut out for us henceforth,” he said.

Though a ‘baby step’, it is very ‘important step’ for future technology in this regard and the process for developing it on a full-fledged basis will take many years.

Asked when the fully developed technology (air breathing propulsion) would be ready for actual application, he said, “It may take decades, definitely not in near future.”

The technology could be combined with Reusable Launch Vehicle which would augment the initiative, he said.