ISRO launches another satellite as part of home-grown GPS

“I am really grateful to the entire ISRO family for having worked this hard and making IRNSS-1I a success,” said the space centre’s chief K Sivan. 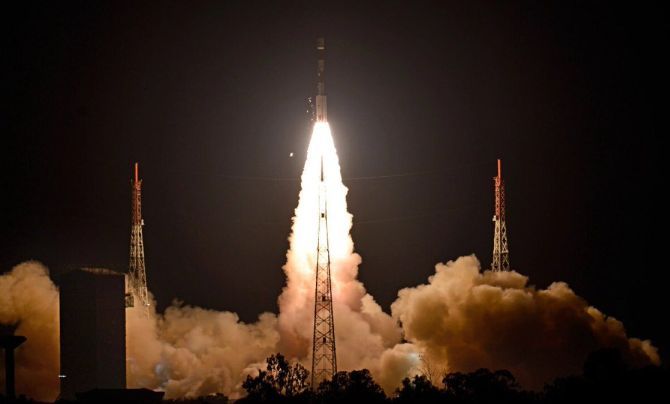 India on Thursday successfully launched into space a navigation satellite for a constellation of spacecraft dubbed as its home-made Global Positioning System that can serve both military and civilian needs.

The Indian Regional Navigation Satellite System (IRNSS), also called NavIC--Navigation with Indian Constellation--is considered on par with United States-based GPS, Russia's Glonass and Galileo developed by Europe. It will broadcast highly-accurate timing signals that a receiver can use to triangulate its location.

The PSLV-C41/IRNSS-1I Mission blasted off at 4.04 am from the first launchpad at the Satish Dhawan Space Centre in Sriharikota in Andhra Pradesh, ISRO officials said, adding
it was a normal lift-off.

The PSLV injected the satellite into orbit 19 minutes after its lift-off. It was the 41st successful mission for the PSLV, officials said.

The 1,425-kg satellite made by Bengaluru-headquartered Alpha Design Technologies, in collaboration with ISRO, is the second satellite to be actively built by the private industry.

The first, IRNSS-1H, could not be put into space because of its failure in August last year.

Built for a 10-year job in space, IRNSS-1I is expected to be ready for work in about a month after routine orbit manoeuvres and tests.

ISRO Chairman K Sivan described the mission as a success and congratulated the scientists.

IRNSS-1I was successfully placed in the designated orbit and it was a precision injection, he said.

Sivan said the NavIC constellation is really going to create history and make innovative applications to the entire community in the ocean-based services especially for the underserved and unserved.

"I am confident that the NavIC constellation will serve the underprivileged and unserved for years to come. I am really grateful to the entire ISRO family for having worked this hard and making IRNSS-1I a success," he added.

"Very recently using the NavIC applications we have created an app that will be released very soon. I request industry and institutions to come forward to take these applications to the user community".

Prime Minister Narendra Modi congratulated ISRO scientists for the successful launch of IRNSS-1I and said it will benefit the common man of the country.

'Congratulations to our scientists on the successful launch of navigation satellite IRNSS-1I by PSLV. This success will bring benefits of our space programme to the common man. Proud of team @isro!' the prime minister tweeted.

IRNSS-1I is expected to replace IRNSS-1A, the first of the seven navigation satellites, that was rendered ineffective after its three rubidium atomic clocks failed.

The launch is ISRO's second attempt at sending a replacement satellite.

The constellation will also provide signals in a space covering India and its surroundings, which could be utilised by using receivers on ground to determine position and time accurately.

The previous mission of a PSLV carrying IRNSS-1H in August last year failed after the heat shield covering the satellite failed to separate.

The IRNSS-1I mission takes place two weeks after the space agency launched GSAT-6A on board GSLV Mk-II. Though the rocket placed GSAT-6A in orbit, the ISRO lost communication with the satellite.

Like its predecessors, IRNSS-1I carried two types of payloads: Navigation and Ranging.

He lauded the team for working tirelessly to make the PSLV-C41/IRNSS-1I a success after a major GSLV mission.

"Today is really a wonderful day for all of us. We have achieved a precise mission. After a major GSLV mission, 14 days back, we have successfully launched IRNSS-1I.

"I must congratulate the entire ISRO team for this wonderful achievement. Essentially in the last 14 days the entire ISRO community worked tirelessly to achieve this mission," Sivan said.