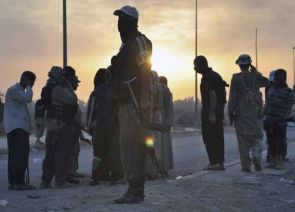 Al-Qaeda splinter group the Islamic State in Iraq and Syria, which has carved out a large fiefdom along the Iraqi-Syrian border, poses a "legitimate threat" to the capital city of Baghdad, a top Pentagon official has said.

"We certainly have enough visibility to see that they continue to press into central and southern Iraq... And they're still a legitimate threat to Baghdad," Pentagon Press Secretary Rear Admiral John Kirby told reporters on Tuesday.

His comments came as the first US troops started landing in Iraq for "advisory" operations.

"We are seeing them try to solidify those gains and to continue to threaten Baghdad," Kirby said, as he expressed concern over the porous border between Iraq and Syria.

"We have begun to deploy initial assessment teams, two special operations teams with approximately 40 personnel previously assigned to the embassy through the Office of Security Cooperation have started their new mission," he said.

In addition, approximately 90 additional troops assigned to help stand up the Baghdad joint operations centre have arrived on station in Baghdad, he said, adding that within the next few days, these troops will be joined by four additional teams of approximately 50 people total who will deploy to Iraq from within the Central Command region.

These teams will assess the cohesiveness and readiness of Iraqi security forces, higher headquarters in Baghdad, and examine the most effective and efficient way to introduce follow-on advisers, Kirby said.

The teams will begin their assessments immediately and provide their findings through the chain of command within the next two to three weeks.

"Now, we continue to fly routine and regular ISR missions over Iraq to the tune of about 30 to 35 flights per day to help us gain better insight about the security situation on the ground. This continued effort will no doubt aid our assessment teams as they begin their important work," he said.

White House Press Secretary Josh Earnest insisted that to confront the existential threat that's posed by ISIS, the nation of Iraq needs to be unified.

"The successful confrontation of the threat that's posed by ISIS will require a unified Iraq, and that's going to require a government that is pursuing an inclusive governing agenda," Earnest added.