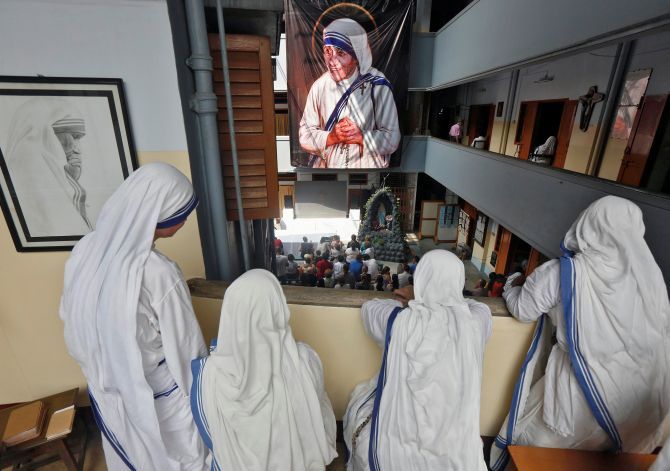 Alleged terrorist Mohd Mosiuddin was plotting Islamic State-style chilling execution of foreigners, especially those from the United States, Russia and the Unityed Kingdom, visiting the Mother House in Kolkata as it would be a "heart pleasing" experience for him, the National Investigation Agency has claimed.

The NIA, in a chargesheet filed before a special court in Kolkata recently, claimed that Mosiuddin alias Musa was planning to stab and kill foreigners, a style frequently chosen by the IS to eliminate its targets.

The Mother House in West Bengal capital is the headquarters of Mother Teresa's Missionaries of Charity.

In its chargesheet, the anti-terror probe agency has said Musa termed the militants operating in Kashmir as "Mujahids (holy warriors) with impure ideologies" who were fighting for Kashmiri land when they should have fought in support of Sharia, the Islamic canonical law based on the teachings of the Koran and the traditions of the Prophet (Hadith and Sunna).

The agency has provided Musa's photographs in Kashmir to buttress its claim that the terrorist had visited the Valley.

The NIA alleged it had proof of his having bought a big knife to commit the terror crimes before fleeing away.

He also allegedly procured pepper spray from Snapdeal, an online marketplace to facilitate his proposed criminal acts as the intended target would be rendered temporarily blinded by it.

The chargesheet alleged that Musa discussed plans for conducting such attacks at the Mother House, which is frequented by foreigners from the US, Russia and the UK. Armed forces of these countries are locked in fierce battles with the IS in many nations.

Musa had discussed with some others the exact location of the Mother House and was claimed to have told them that foreigners, particularly Russians, Britishers and Americans often visited the place. He wanted them killed as the governments of their countries had bombarded the IS in Syria and Libya, the charge sheet alleged.

The NIA had taken over investigation in the case from Howrah police on July 22.

During Musa' arrest, a .38 bore six-chamber revolver, three rounds of ammunition, a knife, a Samsung mobile phone and other incriminating articles were seized.

Subsequently, one Apple Macbook and a sword were seized from his residence at Tiruppur, Tamilnadu.

"Mosiuddin was found involved in furthering the illegal activities of the IS in India and Bangladesh and had been in touch with Shafi Armar...and was also linked to the Jamaat-ul-Mujahideen Bangladesh operatives in Bangladesh," the NIA had said in a statement.

Armar is a former Indian Mujahideen operative who was later claimed to have joined the IS. It was Armar who had radicalised him by sending the links of jihadi sites like Jihadology.net, Al-Shabab media and Just-Paste-it links, etc.

Armar also allegedly sent him videos released by Ansar Ut Tawid which included footages of the war between the IS and Iraqi forces. The videos and speeches of 'Anwar ul Awlaki', a jihadist ideologue and preacher who was killed in a US drone attack in Yemen, were also sent to him by Armar, a native of Bhatkal in Karnataka and one of the main recruiters for IS in India.

Abu Suleiman, a Bangladeshi IS/JMB operative, visited India to meet Musa twice in March, 2015, and May, 2016. He encouraged Musa to use encrypted chat applications like Telegram, Surespot, Threema, Chatsecure, to communicate with him and other IS operatives, the NIA has alleged.