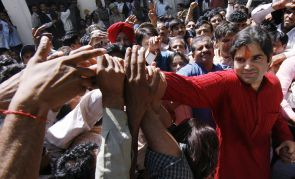 Is the BJP working to polarise the upcoming Lok Sabha elections, hoping to gain by garnering the Hindu votes in its favour? It certainly looks like that, particularly in states like Uttar Pradesh and West Bengal, where there is a big percentage of Muslim votes, and most of the parties -- apart from the BJP -- are wooing that.

The BJP has made Amit Shah, a Narendra Modi confidante, the new in charge of UP. He has been named in the fake encounter killing of Sohrabuddin. And in West Bengal, the party has appointed Varun Gandhi as the in charge. Varun Gandhi spewed hate and venom during an election speech in Pilibhit, and was booked by the police.

A senior source in Congress says, “We believe that the BJP hopes to polarise both these states to its advantage by bringing in persons known for their anti-Mulsim stand”.

The BJP feels that in West Bengal -- where it has no showing worth the name -- all the major political parties (be it Trinamool Congress, the Left and Congress) are busy wooing the substantial 30 per cent Muslim vote bank.

This, say BJP leaders, leaves the field clear for them to woo the Hindu voters, with party analysts of the view that the people of West Bengal are fed up of all the parties and would not be averse to gravitating towards it in a significant way.

The BJP managed to fetch over a lakh votes in the recent by-election in Bengal’s Jangipur, from where Abhijit Mukherjee contested after the seat was vacated by his father Pranab Mukherjee who went on to become the President.

As such the BJP feels it can do much better in the current atmosphere, particularly if the votes are polarised.

Interestingly, the BJP has not put up a candidate in the Howrah by-election even though the party has around 50,000 to 60,000 votes in the constituency. The BJP, while trying to help Chief Minister Mamata Banerjee win back the seat in the divided Congress-Left vote, is also hoping to woo her to join the National Democratic Alliance ahead of the 2014 Lok Sabha election.

With Mamta Banerjee’s government completing two years in office on Monday, US Ambassador Nancy Powell visited her in Kolkata to personally congratulate her. Obviously, the US is nervous at the falling graph of Mamata government’s popularity and the ‘possibility of return’ of the Left government in West Bengal.

Similarly in Uttar Pradesh the BJP feels the combined might of Narendra Modi and Amit Shah would do much to bring the Hindutva forces back in the reckoning in the heartland’s most important state. Particularly since the rest of the parties in UP, like the Congress, the Samajwadi Party and even the Bahujan Samaj Party, have been wooing the Muslim vote.

The BJP hopes that in a polarised scenario, large chunks of the Hindu vote would come to them, helping the party to substantially increase its tally in the Lok Sabha poll.

For the BJP it is crucial to make a head start in UP if it wants a real chance at government-formation in New Delhi, since it was UP, in the past too, which brought the BJP-led NDA into power at the Centre.

With nothing else working for the BJP except the Hindu card, the party is all set to exploit it and hilt with Modi as its latest Hindutva mascot. The BJP hopes that the polarisation it has cemented in Gujarat would also work in the rest of the country, particularly at a time when the Congress is unable to get its act together and the party under Rahul Gandhi’s leadership is still experimenting in a bid to find the right leaders for the right job.

Rahul Gandhi, the All India Congress Committee vice president, who also takes special interest in UP, has changed all of its eight zonal in-charges, appointing new faces along with eight coordinators and changing 31 of its district presidents.

While the earlier zonal in-charges were high profile Congress leaders like Union ministers R P N Singh, Jitin Prasad, CWC member Rasheed Masood, and so on, the new appointees are mostly low key and are not known beyond their immediate areas.

So far Rahul Gandhi’s experiments with either new Pradesh Congress Committee presidential appointments or others have not been greatly successful and have rubbed a large number of people the wrong way, worsening the situation in many states like Bihar.

Next in line, sources say, is the reshuffle of the AICC office-bearers and here too the party can expect the Rahul stamp to evident.