News
Business
Movies
Sports
Cricket
Get Ahead
Money Tips
Shopping
Sign in  |  Create a Rediffmail account
Rediff.com  » News » Is all well between BJP and its alliance partners?

In this COVID-19 phase, the BJP leveraged its pre-eminence again to tip the power scales in its favour and relegate its allies in the National Democratic Alliance to a lesser position. 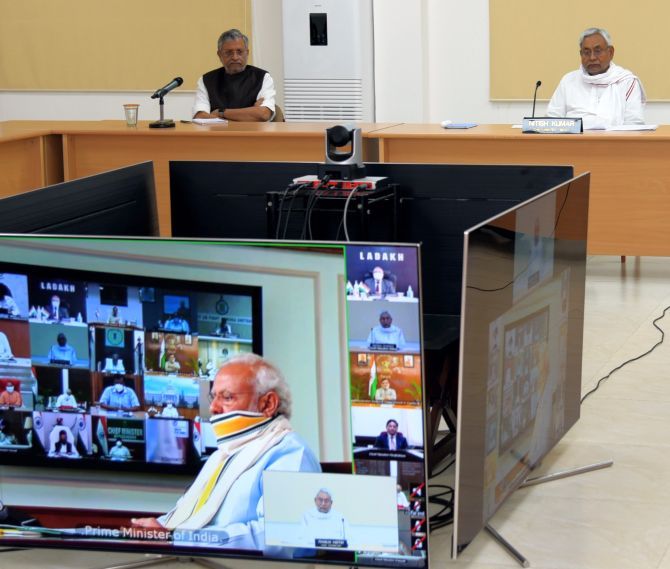 Until April 29, the Janata Dal-United clutched at a straw tossed by Nitin Gadkari, the road transport and highways minister.

The JD-U, which has a coalition government in Bihar with the Bharatiya Janata Party, faced a major predicament in dealing with the plight of the state’s people, who worked across the country principally as casual labourers but were left high and dry after the national lockdown.

There were also students grounded at academic hubs in Rajasthan and Karnataka.

Uttar Pradesh, Bihar’s neighbour, got the logistics in place and arranged buses to ferry home its residents, including students.

Nitish Kumar, the Bihar chief minister who refused to open the state’s borders to the domiciles desperate to return, fumed.

In a TV interview, the minister did not endorse UP chief minister Yogi Adityanath’s move and said: “I feel, at this point, we need to exercise caution. All states should feed and house the migrants to prevent the spread of the virus.”

“We hope the Centre would listen to Gadkari and restrain Adityanath,” a JD-U source said, not realising that by the time Gadkari finished speaking, the Madhya Pradesh and Chhattisgarh chief ministers, the latter a Congressman, followed UP’s example and repatriated their students from Rajasthan’s Kota.

A government source stressed that Adityanath would not have gone ahead without a green light from Amit Shah, the Union home minister.

However, Nitish was intractable.

But he came under pressure from the Bihar BJP that felt the political cost of the CM’s “obduracy” might be too immense to bear in the prelude to the assembly elections, scheduled in October-November this year.

“The poor and the well-off from Bihar were equally impacted. We might have lost on both counts,” a state BJP office-bearer said.

When Prime Minister Narendra Modi spoke with chief ministers on April 27, Nitish cited the Disaster Management Act to him and alleged that states had flouted the guidelines by transporting students and migrants from other regions.

It isn’t clear if he asked the PM to tweak the guidelines.

But after the discussions, Sushil Kumar Modi, Bihar’s deputy CM from the BJP, tweeted to say a “solution” was in the offing to resolve the migrant impasse.

On April 30, he tweeted: “I appeal the GoI to allow special trains to bring migrants from distant places.”

On April 29, the home ministry directed the states to institutionalise a protocol for receiving and sending migrant workers, pilgrims, students, and others left in the lurch.

Nitish “welcomed” the change but a JD-U source admitted: “We did not expect the new guideline to come so soon.”

On the other hand, a BJP source maintained: “The CM was explicitly told that it was coming and he must abide by it.”

The “modification” was the only face-saver the Centre would concede to an “unwilling” partner, who BJP sources alleged, “played politics” amidst a pandemic.

By May 1, the government had already started special trains to bring back those stranded to their home states.

In this COVID-19 phase, the BJP leveraged its pre-eminence again to tip the power scales in its favour and relegate its allies in the National Democratic Alliance to a lesser position.

This despite the fact the Shiv Sena, the BJP’s oldest ally, and the All Jharkhand Students Union left the ruling coalition, making it a vastly truncated form of its 2014 avatar.

“The BJP is very strong vis-a-vis its partners,” said the leader of a relatively small constituent who raised his voice on significant issues in the past.

The PM/BJP has not convened an NDA meeting since the virus ravaged India.

In turn, the allies have not asked for one.

The allies were not oblivious to the larger connotation of the BJP losing power in Maharashtra after the Sena teamed up with the Nationalist Congress Party and the Congress or walking into a shaky coalition in Haryana where the fledgeling Jannayak Janta Party had its way and installed its leader, Dushyant Chautala, as deputy CM.

Shortly thereafter, Chautala met Nitish in Patna and talked about “working together” for Bihar and Haryana’s “development”.

The stated intention was apparently a pretext for forming a clique to contain the BJP.

The Shiromani Akali Dal, the JD-U, and the Lok Janshakti Party slammed the BJP over the Citizenship Amendment Act, though they voted for its passage in Parliament.

Parkash Singh Badal, the SAD patriarch, said: “If a government wants to be successful, it must take minorities along.”

Nitish passed a resolution in the Bihar assembly against the National Register of Citizens and for the restoration of the 2010 version of the National Population Register.

Naresh Gujral, the SAD’s Rajya Sabha MP -- who pinned the responsibility for the Delhi violence to the Centre -- said: “There’s a national emergency of gigantic proportions, so other things will take a backseat.”

The leader of another constituent said: “Old wounds must be covered with a scab. Now’s not the time to raise majority-minority matters.” 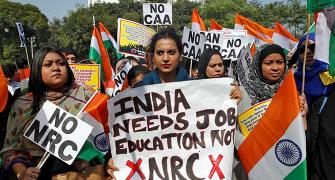 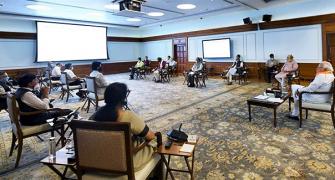 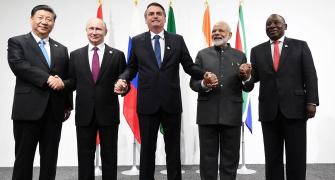