'We have enough thermonuclear bombs'

Were the May 1988 nuclear tests a success?
20 years after Pokharan, a look back at those decisive atomic tests through the eyes of someone who knew. 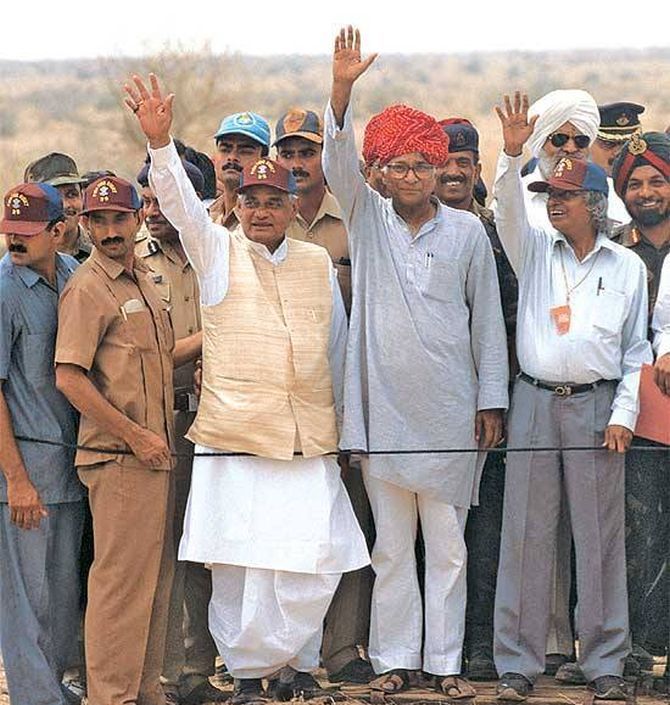 IMAGE: From right, A P J Abdul Kalam, then scientific advisor to the prime minister, then defence minister George Fernandes, then prime minister Atal Bihari Vajpayee and others at the Pokhran nuclear test site, May 1988. Photograph: Press Information Bureau/Facebook

The results of India's thermonuclear tests in May 1998 were examined by different groups of experts and confirmed as fully successful, and the weaponisation based on these tests have been accomplished to full satisfaction, Dr Anil Kakodkar, former chairman of the Atomic Energy Commission, told Karan Thapar on CNN-IBN's Devil's Advocate programme, in a firm rebuttal of the insistence from various involved scientists that this was not so. 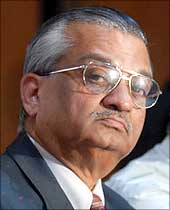 Dr Kakodkar, four leading scientists -- Dr Santhanam, Dr Iyengar, Dr Sethna and Dr Prasad -- have raised serious doubts about the thermonuclear tests of 1998. Dr Santhanam says 'we have hard evidence on a purely factual basis that not only was the yield of the thermo-nuclear device far below the design prediction, but that it actually failed'.

The yield of the tests was verified by several methods based on different principles, done by different groups. These have been reviewed in detail. I had described the tests in 1998 as perfect and I stand by that.

Dr Santhanam says the Defence Research and Development Organisation seismic instruments measured the yield as something between 20 to 25 kilotonnes (kt), hugely different from the claim put out by the Atomic Energy Commission that it was 45 kt.

Do you have proof that the yield of the test was 45 kt?

Yes. No country has given so much scientific details on their tests as we have given and this we have published with the maximum clarity which could be done.

Even in 1998, foreign monitors questioned the yield of the tests. At that time, Indian doubts were only expressed in private.
Now, Indian doubts have burst out into the open and they are being heard in public.

Facts are facts. The measurements were done by different groups, different methods. And, all these groups have come to their own conclusions, which match with each other.

All these five or six different ways of measuring the yield have concluded the yield was 45 kt for the thermonuclear device?

The fission device yield was 15 kt, not 25 kt. And, though the two devices were 1.5 km apart, the geology within that distance changed quite a bit, partly because of the layers that exist and their slopes, but more important, because their depths were different.

So, the placement of the device of the fission kind is in one medium and of the thermonuclear kind in another.

Dr Santhanam says if the thermo-nuclear device had succeeded, both the shaft and the a-frame would have been destroyed. Instead, he says, the shaft 'remained totally undamaged' and as for the a-frame, he says, it 'remained completely intact'.

You must understand the ground motion when a nuclear test takes place.

Depending on the depth of burial and the medium in which it is buried, you could get several manifestations on the surface.

You could get different kinds of craters. You can just get a mound. And, it can vent out.

In the case of the thermonuclear device, the placement was in hard rock -- granite --- and with the depth and the yield for 45 kt, one expects only a mound to rise, which is what happened.

What about the shaft and the a-frame?

There was a cracking of the ground for a fairly large distance. But the phenomena was that it rises as a mound, then comes down slightly but it still remains a mound.

So, there is no question of damage to the a-frame. it has been seen in detailed simulations. And, this simulation is done on codes which have been actually verified in 3-D situations on the test data available from abroad and validated, and these have been published in international journals.

One of your predecessors -- former chairman of the Atomic Energy Commission P K Iyenger -- said: 'The recent revelations by Dr Santhanam are the clincher. He was one of the four leaders associated with Pokhran II, the team leader from the DRDO side, and he must certainly have known many of the details, particularly with regard to the seismic measurements.'

Before the 1998 tests, all work was done under cover and we required a lot of logistical support and that all was being provided by DRDO. But things were still being done on a need-to-know basis. So, to assume Dr Santhanam knew everything is not true.

He knew everything within his realm of responsibility.

Everything that he needed to know, but not more?

Dr Santhanam says these doubts were formally raised by the DRDO with the government as far back as 1998 itself. And in a meeting arranged by the then national security advisor Brajesh Mishra, they were brushed aside.

Immediately after the tests, we carried out a review with both teams present -- the Bhabha Atomic Research Centre team as well as the DRDO team.

If the instruments didn't work, where is the question of going by any assertions based on (that)?

In an article that Dr Santhanam has written recently, he says the Department of Atomic Energy is hiding facts from successive Indian governments, from Parliament and from the Indian people.

As I said earlier, we are perhaps unique in giving out (the volume of) information and that, too, immediately after the tests.

There is no hiding. There are limits to what can be revealed. These have been discussed in the Atomic Energy Commission, in not one, but four meetings, after the 1998 tests. And there are people who are knowledgeable.

Dr Ramanna was a member of the commission at that time. So, where is the hiding?

To repeat, there are methods through which one has assessed the test results. Each one of them is a specialisation in itself and there are different groups --- not just individuals, but groups -- which have looked at these. This is also on a need-to-know basis.

Now, if all of them come to conclusions which are by-and-large similar, what other things can you do in terms of forming a peer group of scientists?

The matter is conclusively sorted out?

That's right. And after this controversy has been raised and it was again reviewed by the Atomic Energy Commission, we had gone through the records and the commission has come out with an authoritative statement.

Given that these are doubts about India's one and only thermo-nuclear test, do we need more tests?

The thermo-nuclear test, the fission test and the sub-kilotonne test all worked as designed. They are diverse. In terms of detailed design, their content is quite different.

So, we think the design done is validated and within this configuration which has been tested, one can build devices ranging from low kt all the way to 200 kt. And that fully assures the deterrence.

The truth is that all the established thermonuclear powers needed more than one test. Can India be the exception?

Dil Maange More, that's another story. But we are talking about a time where the knowledge base has expanded, the capability has expanded and you carry out a design and prove you are confident that on the basis of that design and that test, one can build a range of systems right up to 200 kt.

We have a credible thermonuclear bomb?

Why are you using singular? Make that plural.

We have thermonuclear bombs in the plural? With a yield of at least 45 kt each?

Much more than that. I told you we have the possibility of a deterrence of low kt to 200 kt.

So, when people like General Malik, the former army chief, say the army wants assurance of the yield and the efficacy of India's thermonuclear bomb, what is your answer?

I think that is guaranteed. The army should be fully confident and defend the country.

There is no issue about the arsenal at their command.

This interview was first published on Rediff.com on December 14, 2009. 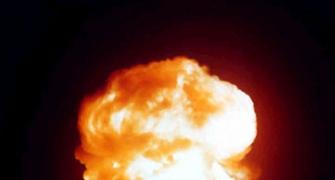