Taking on the Adityanath government over handling of protests against the amended Citizenship Act, Congress leader Priyanka Gandhi Vadra on Sunday said it has "crossed all limits of inhumanity" and claimed party worker Sadaf Zafar was arrested on "baseless" charges. 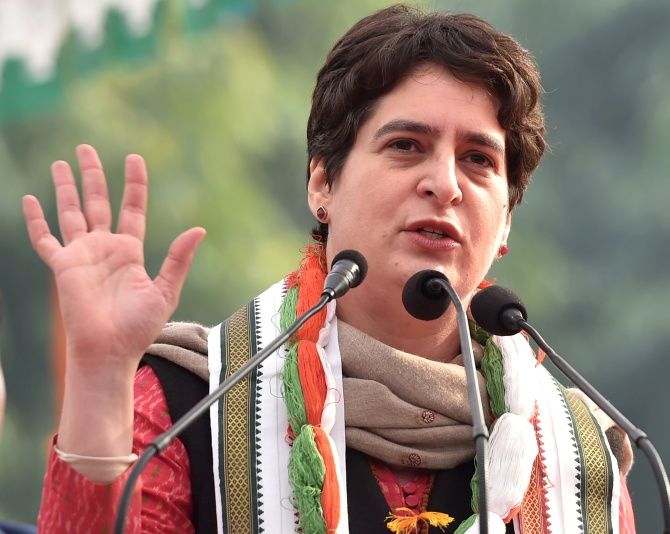 "This insensitive government has separated children from their mother and the older generation from their children," the Congress general secretary said a day after she had accused the UP Police of manhandling her when she resisted their attempts to stop her from visiting the residence of retired IPS officer SR Darapuri, who was also arrested in connection with the recent anti-Citizenship Amendment Act protests.

Zafar was arrested on December 19 while she was live on Facebook from the spot where protests against the amended citizenship law had gone violent. Police had said she was arrested for her involvement in clashes. At least 19 people were killed and hundreds of others injured in the violence in the state.

After visiting Darapuri's family, "Priyanka Gandhi met the family members of Sadaf on Saturday night at her (Priyanka's) Lucknow residence, and told them that the Congress stands firmly with them," said UP Congress chief Ajay Kumar Lallu.

"Uttar Pradesh government has crossed all limits of inhumanity. Congress worker Sadaf Zafar in a video can be clearly seen telling policemen to arrest those indulging in violence. The police has levelled baseless allegations on Sadaf and put her in jail," Priyanka Gandhi tweeted in Hindi.

The Congress general secretary said Zafar's children were eagerly waiting for her release.

She had on Saturday alleged that she was manhandled by police personnel who grabbed her by the throat and pushed her when she was on her way to the residence of Darapuri.

Hitting back at the Congress leader, Uttar Pradesh Deputy Chief Minister Keshav Prasad Maurya said that such 'nautanki' (theatrics) will not fetch votes for the Congress and what's left of the party will also be finished.

In a Hindi tweet late on Saturday night, Maurya said that it seemed by Priyanka Gandhi's behaviour that her party has become a 'danga karao party' and it cannot tolerate the peaceful atmosphere and development in Uttar Pradesh.

He said the state was a symbol of Hindu-Muslim unity and added that the Congress and the Samajwadi Party were getting disturbed, seeing their dark political future.

"Congress leader Priyanka Gandhi does not want the welfare of the people of Lucknow. 'Nautanki' (dramatics) will not fetch votes for the Congress, and what's remaining of the party will also be finished.

"Everyone in UP knows that the Congress only has members who are interested in getting their photos clicked. By misleading the country on the issue of CAA, the Congress has become a villian in the eyes of the public," Maurya said.

Reacting to Maurya's comments, Congress state media management committee member Lalan Kumar said, "BJP leaders are making such statements as they are afraid of Priyanka ji. Ever since she has taken charge of UP, the party workers are feeling galvanised."

"The BJP is losing its political ground in the state and the country with every passing day. And, in the 2022 UP Assembly elections, the Congress will emerge victorious and form the government," he said.

Meanwhile, Priyanka Gandhi's husband Robert Vadra on Sunday lauded the Congress general secretary for reaching out
to people who need her.

"I am extremely disturbed at the way Priyanka was manhandled by the woman cops... But she was determined and she travelled on a two-wheeler to meet family members of former IPS officer SR Darapuri," he said.

"I am proud of you Priyanka for being compassionate and for reaching out to the people who need you. What you did was correct and there is no crime to be with people in need or in grief," Vadra tweeted.

He also shared a video on Twitter of Priyanka Gandhi being "manhandled" by women cops of UP Police while trying to stop her from meeting the family of former IPS officer S R Darapuri. She can be seen riding pillion on a two-wheeler.

The UP police had denied the allegation of "manhandling" as "false".

An angry Congress had slammed the police action and demanded imposition of President's rule in UP.

Lallu said that Priyanka is likely to stay in Lucknow for nearly a week.

"Detailed discussions were held on party's future strategy. The party office bearers were told that they should become the voice of students, farmers, labourers, poor and the oppressed. They were also told that every (polling) booth should be strengthened."

"Priyanka Gandhi Vadra also said that the party must raise voice against the anti-people and anti-democratic actions of the government. The party must register its position strongly at the ground level in the upcoming elections," the UP Congress chief said.

Priyanka Gandhi also went to Rae Bareli on Sunday to offer condolences to the family of old-time party worker Sunil Srivastava, who had passed away recently.

The youth wing of the party held a demonstration on Sunday near the Uttar Pradesh Bhawan in New Delhi and demanded the resignation of Chief Minister Yogi Adityanath.

The protesters were trying to march towards the UP Bhawan from the nearby Assam Bhawan in South Delhi's Chanakyapuri area.

"The UP government has sent many people to jail and now the state police is manhandling senior political leaders. It has lost all moral and social right to remain in power," Indian Youth Congress media in-charge Amrish Ranjan Pandey alleged. 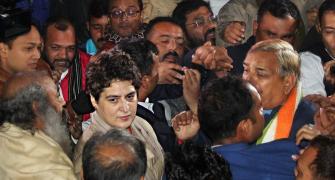 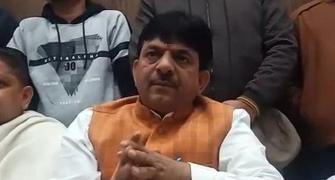 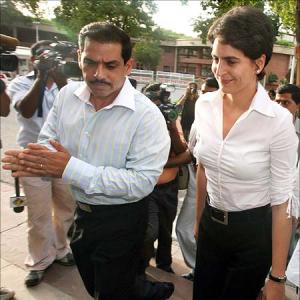