5 infiltrating terrorists gunned down on LoC The Army on Monday foiled a major infiltration attempt by terrorists to cross over from Pakistan-occupied Kashmir into the Machhil sector by killing five ultras.

"A major infiltration bid was foiled today in the Machhil sector by alert troops," a defence spokesman said in Srinagar.

He said five terrorists were killed in the operation which was going on when reports last came in.

During the search, five weapons have been recovered by the Army, the spokesman said.

Source: PTI© Copyright 2021 PTI. All rights reserved. Republication or redistribution of PTI content, including by framing or similar means, is expressly prohibited without the prior written consent.
Related News: Army, Kashmir, Machhil, Srinagar
SHARE THIS STORY
Print this article 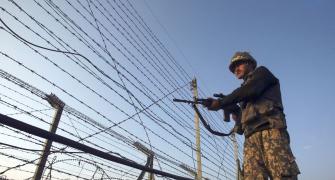