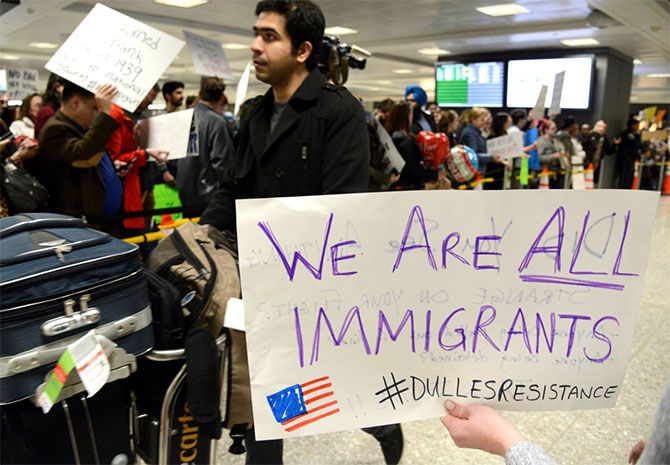 A group of 52 Indians, mostly Sikhs, has been held at a detention centre in the United States State of Oregon for being part of a large contingent of illegal immigrants seeking asylum, an American lawmaker has said.

The Indians form the largest group of detainees in the total 123 illegal immigrants being held at a facility in Sheridan.

The detention centre was recently visited by a group of Democratic lawmakers from the Oregon State, who later told the media about the alleged inhuman condition of the illegal immigrants.

The immigrants are seeking asylum in the US. The detainees from India form the largest group being held in Sheridan, wrote Congresswoman Suzanne Bonamici in a blog post.

She along with several other Democratic lawmakers from the State visited the detention centre on Saturday.

"Through our Punjabi translator, we learned that these men were planning to request asylum because they faced severe religious persecution in India. Most are Sikh or Christian. Instead they were incarcerated in a federal prison," she said.

"They said they came to the United States for religious freedom, but they felt as if they were 'going crazy' because they are being confined in small cells for up to 22 hours a day," the Congresswoman said.

The Indian detainees pointed out that the other non-immigrant prisoners get far more time out of cells, she said.

Most of the detainees at the federal facility are asking for asylum because they experienced violence or persecution in their home countries, Bonamici said.

Several had travelled to the border with a wife and a child or children; none knew where their family members are, she said.

"This is a shameful hour in US history. I don't care what your stance on immigration is, no one should favour ripping children out of their parents' arms ...." Democratic Congressman Earl Blumenauer told reporters after visiting the detention centre.

He alleged that President Donald Trump and Attorney General Jeff Sessions have doubled down on their anti-immigrant, xenophobic agenda with the administration's new 'zero tolerance' policy on immigration.

'The administration is criminalising families who are fleeing abuse and violence and separating children as ICE detains or deports their parents,' he said in a statement.

According to the local daily The Oregonian, of the total detainees, 52 have identified themselves as Sikhs or Christians from India.

They alleged that they fled from their country because of religious persecution from the Hindu majority.

The Indians told the delegation that their Hindi and Punjabi translators were the first outsiders they've been able to talk to since they were imprisoned weeks ago, the daily reported.

"As the child of parents whose families found refuge in America from the terrors of Nazi Germany, I strongly believe Donald Trump's cruel and callous treatment of human beings seeking asylum flies in the face of America's core humanitarian values," Wyden said.

"Trump's choice of zero tolerance for the refugees we met today and for the others imprisoned around the country this Father's Day weekend makes zero sense and shows zero understanding of American values.

"What I saw and heard today highlights the urgency of reversing Trump's mean, dangerous and damaging actions -- returning America to our unique role as a beacon of hope that welcomed our immigrant ancestors and creating the future we want for our children," he said.

These 123 detainees are among the more than 1,600 people that Immigration and Customs Enforcement (ICE) is holding in federal prisons across the US as it enforces Trump's ‘zero-tolerance policy’ on immigration, the lawmakers said in a joint statement.

The Congressional delegation was told that that the detainees are being held upwards for 23 hours a day with three men bunked in each cell.

The prison does not have the resources to house ICE detainees alongside pre-trial inmates who are normally held in the facility.

The delegation was also told that incompatibility between BOP and ICE telephone systems was preventing ICE detainees at the BOP facility from accessing legal services.

According to lawmakers, the detainees described stress as they sit in cells day after day without knowing when they will get a hearing, or get a lawyer, or what comes next.

"Several men had been separated from their children, and experienced the added stress of not knowing what happened to their families.

"Under Trump's 'zero-tolerance policy', the men's children were taken away at the border -- one man said an ICE official told him, 'it's not my choice; the decision came from above' -- and the fathers still don't have any information about their location, condition or well-being," the lawmakers said. 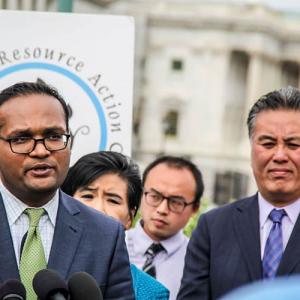