An Indian vessel is set to join a new international campaign named 'The Audacity of Hope' to press for an end to the Israeli blockade of the Gaza Strip, months after nine pro-Palestinian activists were killed in an attack on an aid ship bound for Gaza.

An e-mail circulated by pro-Palestinian activists in the US said an American ship named after US President Barack Obama's autobiography, will join a flotilla of other vessels from Europe, Canada, India, South Africa and the Middle East in an additional attempt to break the Israeli naval blockade in early autumn, the Ha'aretz daily reported.

The new campaign comes amid an increased international hue and cry to force the Jewish state to lift its siege of the coastal territory.

The effort is supported by several prominent figures, including Prof Rashid Khalidi, a well-known critic of Israel whose friendship with the US president has raised eyebrows in Jerusalem.

It aims to raise $370,000 next month to obtain possession of a ship that could accommodate between 40 and 60 people, and for operational expenses, the email said.

Right-wing columnists immediately seized on the involvement of Khalidi, whom they portrayed as a friend of Obama who was supporting Hamas.

Khalidi said he does not know what the ship will ultimately be named, but added the White House should not be embarrassed by the name 'The Audacity of Hope', and should instead call for Israel's naval blockade of the Hamas-controlled territory to be lifted, the report said.

The Columbia University History Professor, a US national born to a Palestinian refugee, Khalidi said that although he will participate in the fundraising event for the ship, he will not be sailing in it himself.

"Given the national-religious hierarchy which determines what the Israel Defence Forces  can do to whom, the fact that the ship is American will make it harder to deal with it as the Mavi Marmara was dealt with," he said referring to the Turkish aid ship raided by Israeli Naval commandos on May 31, on which nine activists were killed in the ensuing fight.

Khalidi characterised the blockade as a measure "imposed on a population of 1.5 million people who are effectively imprisoned, and most of whom are deprived of living a normal life".

This form of collective punishment could constitute a war crime, he said.

When asked by the Israeli daily if he was aware of the proposed name of the ship and whether the choice of name was appropriate, the professor said, "I am not one of the organisers of this effort, and had no knowledge that this name had been chosen".

Khalidi said if the name is a problem for the Obama administration, it can simply insist publicly that Israel lift the siege.

"That of course would require it to respond to the systematic mendacity of those in Congress and elsewhere who support the siege. It is shameful that the US and Egyptian governments are complicit in this indefensible siege," he asserted.

He said the fact that the ship is American would bring attention to the Gaza issue, which had begun to have an impact on American public opinion.

"It has primarily been a natural response to the actions of successive Israeli governments," he said.

He said the actions have appeared more and more unjustifiable to growing segments of US public opinion, and asserted that the only place that has remained largely impervious to this change has been the US Congress.

"This is especially the case among younger people, who can detect the deception and chicanery which are an essential part of 'selling' such rotten goods as occupation, discrimination, and attacks on civilians.

"It is also visible in widening sectors of the American Jewish community", he noted.

Khalidi argued that Israel's blockade of Gaza was punishing civilians while having little effect on the militant Hamas administration.

He insisted that the siege is not imposed on the Hamas government, or on a 'terrorist entity', as the Israeli government describes the entire Gaza Strip but on the population as a whole.

"Moreover, it hardly affects that government, as has been amply reported... and other organs not known for their sympathy for Hamas", he pointed out.
Source: PTI© Copyright 2020 PTI. All rights reserved. Republication or redistribution of PTI content, including by framing or similar means, is expressly prohibited without the prior written consent.
Related News: Prof Rashid Khalidi, US Congress, Gaza Strip, Israel Defence Forces, Hamas
SHARE THIS STORY
Print this article
Stop embarrassing us, Congress tells Tharoor
'China's military build-up is alarming'
How Hamas's top leader was assassinated 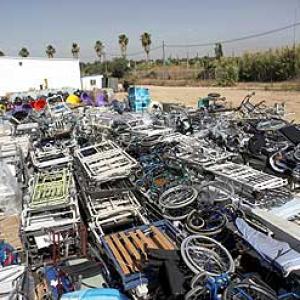 US Congress approves sale of C17 planes to India