Navy to despatch 3 warships to Libya

The Indian Navy has decided to despatch three naval warships including its largest amphibious vessel INS Jalashwa to evacuate its citizens stranded in trouble-torn Libya.

"We have sent a proposal to the Defence Ministry to send three warships including two destroyers and the INS Jalashwa to Libya to bring back around 18,000 Indians stuck there," Navy sources said.

"The final decision on sending the warships on the 7,000 miles voyage to Tripoli would be taken at the highest-level by the Defence Ministry in consultation with the External Affairs Ministry (EAM)," they added.

If the ships are ordered to move towards Libya, it will take them at least 10 days to reach their destination. The Defence Ministry had yesterday recieved a request from the EAM to see if it could help in bringing back Indian citizens from there.

Officials said there were a number of issues including facilitating the entry of Indian vessels into Libyan harbour were also being considered by the government.

The Jalshwa is the largest available ship with the Indian Navy, which can be used for carrying out humanitarian efforts of this kind. The warship is usually deployed in Vishakapatanam under the Eastern naval Command but was deployed in Mumbai on the western seaboard for taking part in the TROPEX exercises.

The EAM has already hired a ship named Scotia Prince with capacity of carrying 1,200 passengers to do the task. 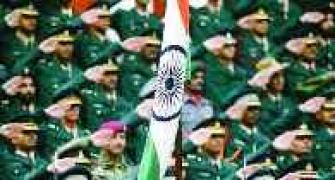 Defence ministry may set up land regulator
Libya: Gaddafi struggles to hold on to power