The defence minister claims MoD 'alive and kicking' after 'getting the weeds out', reports Ajai Shukla. Defence Minister Nirmala Sitharaman has mounted a robust defence of her ministry's performance since 2014 when the National Democratic Alliance formed the government.

Talking to journalists in New Delhi on Friday, July 13, Sitharaman said: "This is an alive and kicking ministry, which is no longer held back by policy paralysis. Things are moving and the military is fit and ready."

Contrasting her decision-making with that of the United Progressive Alliance till 2014, she said: "Many procurements are happening now, we are moving quickly."

Asked how the NDA was claiming greater and quicker procurement, when capital allocations to defence had risen only in the low single digits, Sitharaman again took a swipe at the UPA, stating: "You can have huge allocations, but not spend the money. It is more important to make sure the allocations are spent."

Sitharaman accepted that the NDA government too had under spent its capital budget in its early years.

"In earlier years, we were getting the weeds out. Then, in 2016-2017 and 2017-2018, we utilised our budget fully," said Sitharaman, suggesting that the NDA surrendered funds earlier because an enabling policy framework was not yet in place.

Unlike earlier, when the DAC met once a quarter or so, Sitharaman ensures monthly, and sometimes fortnightly meetings.

"The DAC of late has just one or two agenda points when it meets. Earlier, there were seven-eight items on the agenda. Now, we have cleared the backlog and are on top of things," she claimed.

Pressed on why orders are not yet flowing to the private sector, which the NDA had vowed to develop as a much larger player in defence production, Sitharaman argued that setting policy was a "time consuming" task.

"Transparency is needed in decision-making, but there is now a realisation that it (decision-making) can be simplified without compromising on transparency," Sitharaman said.

The minister was also questioned about the lack of movement on the 'strategic partner' programme, in which capable and deep-pocketed private sector firms are identified to build specified categories of weaponry -- initially fighter aircraft, helicopters, submarines and armoured vehicles -- with technology provided by chosen international defence firms.

"Four sectors have been identified (for strategic partners to work in). But it has taken time. We want to move forward quickly, we want to make initial strides... The SP model will happen soon," said Sitharaman.

The Dhirendra Singh Committee proposed the SP policy in July 2015, but not a single contract has yet been awarded under this.

When the Defence Procurement Procedure of 2016 was announced on March 28, 2016, there was a blank Chapter VI, which the SP policy was to fill.

A year later, a sketchy SP policy was released, which needs further elaboration.

The defence ministry is still working on that.

Sitharaman also revealed that a defence ministry committee, headed by the Director of Costs, has been constituted to examine how defence public sector undertakings fix the sale price of equipment they sell the armed forces.

The army, navy and air force have been complaining about DPSUs pricing their products exorbitantly -- or 'gold plating' prices, in defence production terminology.

"The Indian Air Force has specifically asked for the pricing of the Tejas light combat aircraft to be assessed," said Sitharaman.

The committee will assess the price proposed by Hindustan Aeronautics Ltd which builds the fighter.

Sitharman says a report is expected from the committee within about 60 days.

The defence minister dismissed concerns that well-connected private sector players like the Anil Ambani-led Reliance Defence and the Adani Group would be selected as SPs, even though they apparently fell short of the required financial criteria.

"There are no subjectivities involved in assessing a company's financial health. The parameters are clearly laid down and no one person can decide (in favour of a company). There is a whole group of people looking into whether a company meets the financial and technical criteria or not," she said.

Sitharaman, who has been defence minister since September 2017, was preceded by Arun Jaitley (two tenures) and Manohar Parrikar during the NDA's term in power. 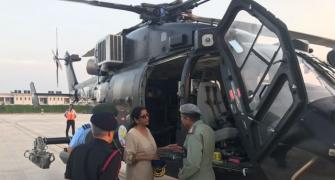 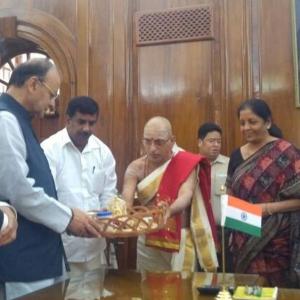