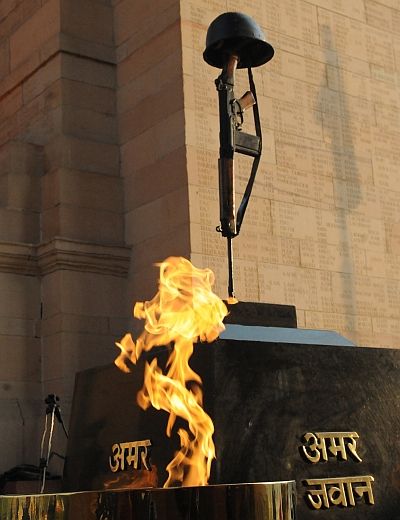 As India celebrates its 67th Republic Day, Rediff.com takes a look at some brave men who stood their ground to protect their country from those who sought to bleed it. 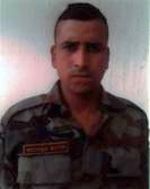 Honoured For: On the intervening night of September 2-3, 2015, Lance Naik Mohan Nath Goswami was part of an ambush in Haphruda forest at Kupwara district of Jammu & Kashmir.

At about 2015 hours, there was a fierce encounter with four terrorists wherein two of his comrades were injured and pinned down.

Lance Naik Mohan along with his buddy dashed forward to rescue their injured colleagues, knowing well the risks to their own lives.

He first assisted in eliminating one terrorist. Sensing grave danger to three of his wounded colleagues, Lance Naik Mohan with utter disregard to his own personal safety, charged at the remaining terrorists drawing intense fire from them.

He was hit in the thigh. Unmindful, he closed in and eliminated one terrorist, injured another and was again shot in the abdomen.

Undeterred by his injuries, he hurled himself on the last terrorist and killed him at point blank range before succumbing to his wounds. Lance Naik Mohan not only killed two terrorists, but also assisted in neutralizing the other two and save the lives of three of his wounded colleagues. 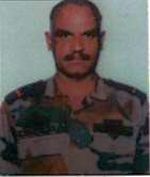 Honoured For: Subedar Mahendra Singh was a veteran of numerous firefights, where, time and again his inspiring leadership, resilience and courage resulted in outstanding successes.

He had been awarded Sena Medal on the Line of Control for exemplary courage and initiative wherein he shot dead a Pakistan Regular Army in 2013.

On September 2, 2015 at 2015 hours, contact was established with terrorists in Darel forest at Kupwara district of Jammu and Kashmir resulting in multiple splinter injuries to two comrades.

His audaciousness startled the other terrorist who opened indiscriminate fire at him. Undeterred, he closed in with the terrorists when one terrorist rushed out firing and grievously wounded Subedar Mahendra in the abdomen.

Despite his injury which paralysed him below the waist, he shot dead the terrorist at point blank range. Heedless of the threat posed by the terrorist fire and his incapacitating wound, he, in order to prevent any further casualties, forbade all attempts to evacuate him and endured tremendous pain to extricate himself. 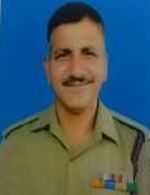 On the night of January 01/02 2016 at 0330 hours, while working on bonafide military duty at Defence Service Corps lines, five to six heavily armed terrorists entered the lines and opened indiscriminate fire on the troops working in the said location.

The heavy firing resulted in two of his colleagues being fatally wounded.

In the process two more terrorists in vicinity opened fire on SepoyJagdish Chand killing him on the spot.

The great presence of mind, unmatched bravery and valour by Sepoy Jagdish Chand minimized further loss of lives and gave time for the quick reaction teams in the vicinity to react. Sepoy Jagdish Chand’s actions was also a setback to the terrorists. 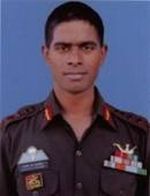 Col Santosh with his inspirational leadership and humane skills and altered the narrative of kupwara town through successful Operation Sadbhavana initiatives in education, sports and health care.

Colonel Santosh was leading a search operation based on specific input about the likely presence of terrorists in general area Manigah Forest of Kupwara district of Jammu and Kashmir on November 17, 2015.

At about 1215 hours, he received an input about the likely movement of terrorists in the forested area near Kashmiri Manigah.
Always having led from the front, Colonel Santosh alongwith his Quick Reaction Team expeditiously moved to the suspected site. As the team was deploying, they came under heavy and effective fire of terrorists hiding in the forest.

Undeterred by the heavy volume of terrorists fire, Colonel Santosh provided his troops an opportunity to take cover. In the fire fight however, he suffered multiple gunshot wounds. Unmindful of his grievous injuries, Colonel Santosh kept the terrorists pinned down till he was evacuated. He later succumbed to his injuries and attained martyrdom. 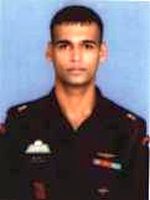 Honoured For: Major Praphul Kumar Bhardwaj launched a special operation in Awankhu village in Phek district of Nagaland, 120 km from the closest existing Assam Rifles post on the night of July 13, 2015.

At 2345 hours, on observing some movement around a hut, Major Praphul along with a buddy pair closed in to ascertain the movement upon which they drew heavy volume of fire.

Sensing danger to his party, in the absence of any cover and accurate incoming fire, Major Praphul charged onto the hut and neutralized one terrorist at point blank range.

During this action, he sustained gun shot wound in his right elbow as also his weapon was hit by a bullet, thereby jamming it. Despite profusely bleeding, with his weapon now non functional and his party pinned down, Major Praphul crawled and lobbed two grenades in the hut and neutralized the second terrorist. 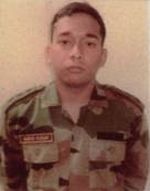 Honoured For: Major Anurag Kumar was leading a helicopter inserted 9 PARA (Special Forces) team in search and destroy operations at Lidder Panzal in Baramulla district of Jammu and Kashmir on August 26/27, 2015.

Post insertion, Major Anurag led his squads to the location where terrorists were last seen and organized the search.

At 1400 hours on August 26, 2015, the officer observed suspicious movement behind boulders and deployed his squads before shouting a challenge which drew indiscriminate terrorist fire.

Realising the grave threat to his men from the ricocheting bullets, the officer risked his safety and under covering fire of Havildar Virender Singh and Naik Javid Ahmad Chopan closed in with and eliminated one terrorist.

Major Anurag then established a cordon to cut off escape of remaining terrorists.

At 1100 hours on August 27, 2015, a terrorist attempting to break the cordon rushed out firing indiscriminately. Unmindful of the heavy fire, Major Anurag engaged and shot dead the terrorist at close quarters. He further engaged one trapped terrorist in a conversation thereby assisting Naik Chopan in his apprehension. 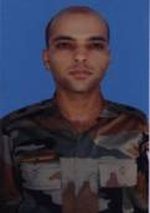 Honoured For: Major Sandip has been operating in Pulwama since July 2013 and his flair for generating intelligence and conduct of operations is exemplary.

On August 10, information was received about the presence of terrorists in village Ratanpur at Pulwama district of Jammu and Kashmir.

Major Sandip stood his ground and retaliated the fire which pinned down the terrorists. Undeterred by heavy fire and showing exceptional presence of mind, the officer redeployed his team which prevented the escape of terrorists.

On August 11, after a grueling eighteen hours of firefight, Major Sandip decided to crawl close to the terrorists in an open area without any cover. As he was doing so, he came under heavy fire. Unmindful of the grave danger, he crawled close and eliminated both the terrorists. The bold action not only ensured elimination of two Lashker terrorists but also prevented collateral damage. 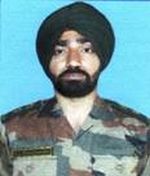 Honoured For: On June 5, 2015, Lieutenant Harjinder Singh was the commander of an ambush point in Jammu and Kashmir.

At 2230 hours, a group of three terrorists was spotted.

Lieutenant Harjinder Singh continuously tracked the movement of the terrorists and immediately assessed the situation and engaged the infiltrators.

The effective fire forced the terrorists to move along the anti-infiltration obstacle system to a higher ground. The terrorists split into two groups to divert attention and escape.

At 0500 hours the officer moved to engage the terrorists. Displaying exemplary courage, he accurately fired the Multi Grenade Launcher and neutralized the first terrorist. In the meantime, the second terrorist opened with automatic fire. 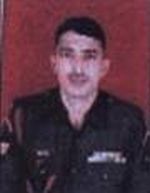 Honoured For: Naik Satish Kumar had been serving with the 21 Rashtriya Rifles since April 7, 2015.

On December 4, 2015, he was commanding a small team as part of search and destroyed operation in Boban Wastar Forest.

Observing speed and stealth, he led his small team to the likely target area, searching the forest cautiously.

At 1305 hours, Naik Anil was suddenly fired upon by terrorists injuring him.

Realising Naik Anil being hit, Naik Satish Kumar crawled ahead to a fallen tree, engaged and eliminated one terrorist at close range. He then provided Naik Anil first aid and ensured his timely evacuation.

Simultaneously, the second hidden terrorist opened fire injuring him on his right leg. Unmindful of his injury, Naik Satish engaged this terrorist and despite profuse bleeding closed in, lobbing two hand grenade towards the terrorist who was still firing and killed him.

However, during his assault towards the terrorist he suffered another gunshot wound and attained martyrdom. 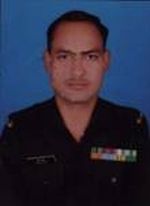 Honoured For: On the night of August 8, 2015, three terrorists attempted infiltration in Lara locality along Jumagund Nar on the Line of Control at Jammu and Kashmir. Naik Kheem Singh Mehra was deployed as a part of an ambush to prevent their escape.

At 0530 hours, the terrorist group was spotted by Naik Kheem Singh moving in the jungle across Jumagund Nar towards Line of Control. Displaying tenacity, grit and total audacity, Naik Kheem Singh advanced across the Nala, climbed on the opposite spur and engaged the terrorists at close range killing one terrorist on the spot and preventing their escape. 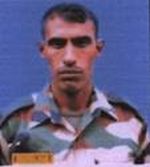 Honoured For: On May 25, 2015 Sepoy Dharma Ram was part of a patrol launched by Major Kobitirha Sanyal towards village Kanjikul at Kulgam district of Jammu and Kashmir.

At 1300 hours the patrol came under sudden heavy volume of fire from a nearby house. Sepoy Dharma Ram exhibited exemplary presence of mind to warn his team of the direction of fire and encountered the terrorist fearlessly in a direct firefight.

He selflessly put himself in the face of terrorist fire and fought with nerves of steel to prevent any team member from getting injured.

During the firefight, the individual sustained two bullet wounds on his back and thigh. Unmindful and undeterred from the grave injury and although bleeding profusely the individual exhibited exemplary field craft to crawl to an appropriate position from where he brought accurate fire on the terrorist and injured him gravely. The terrorist was thus neutralised and identified as Lashkar-e-Tayiba District Commander. 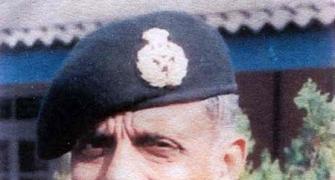 Revealed: Price is holding up the Rafale deal 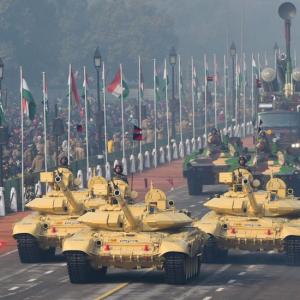 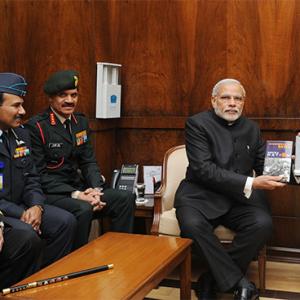